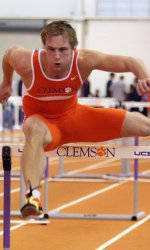 Clemson, SC – The men’s track & field program will host the JRF Multi-Event Challenge this weekend at the school’s indoor complex. The meet, named in honor of the Tigers’ late assistant coach Jarrett Ryan Foster, will begin Friday with the 60m dash at 1:30 PM. The long jump, shot put, and high jump will also be held Friday. The final three events of the heptathlon will take place Saturday, beginning at 11:00 AM.

The heptathlon will feature 13 multi-event athletes representing five different schools. Clemson will enter four student-athletes, led by red-shirt junior Mike Feathers. The Grand Island, NY native ranks fifth all-time in school history in the heptathlon after scoring 5,131 points in 2006 at the ACC Championships. He placed fifth in the conference at that meet.

Miller Moss will compete for the Tigers as well. A red-shirt freshman from Sumter, SC, Moss was a USA Junior All-American in the summer after finishing seventh in the decathlon. He is one of the top long jumpers on the Tigers’ squad.

Joey O’Rourke and Conner Webb will also compete this weekend. O’Rourke was a scorer for the Tigers last season at the ACC Indoor Championships in the heptathlon. Webb is a freshman from Oklahoma City, OK who was All-State as a high school senior in the hurdles and high jump. Among the chief competition this weekend the Tigers expect to see will be Auburn athlete Jager Livingston. He was a scorer at the 2007 SEC Championships in the heptathlon and finished sixth at the JRF Multi-Event Challenge last year as well. Thomas Barrineau, a sophomore at Georgia, competed against Clemson’s Moss in the USA Junior Championships in the summer of 2007.