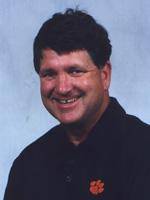 Clemson Men’s Tennis To Compete In The 2003 ACC Tournament

CLEMSON, SC – The second-seeded Clemson men’s tennis team will face the winner of the North Carolina/NC State match on Friday, Apr. 18 on the second day of the 2003 ACC Tournament. The match is scheduled for 12:00 p.m at the Millbrook Tennis Center in Raleigh, NC

Clemson is 3-4 all-time against North Carolina at the ACC Tournament. The two teams last met at the tournament in 2001, as the Tigers downed the Tar Heels in the quarterfinals by a score of 4-3. Earlier this season Clemson defeated North Carolina 5-2 at the Hoke Sloan Tennis Center.

The Tigers are 3-0 all-time against NC State at the ACC Tournament. Clemson and the Wolfpack last met at the tournament in 2001 when the Tigers defeated NC State in the first round 4-0. This season Clemson posted a 7-0 victory over the Wolfpack on Mar. 2.