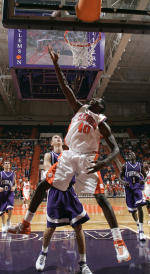  Clemson is coming off a 30-point victory against Appalachian State last Friday evening. K.C. Rivers came off the bench to score a career high 24 points, including a career high six three-point goals to lead Clemson to the victory.

 Rivers has not started a game, but has been in double figures in all five games so far this season, the only Clemson player who can make that claim.

 This is the second all-time meeting between Clemson and Mississippi State on the basketball court. The Tigers won the first meeting 59-32 in Houston, TX in December of 1981. That game was played at Hofheinz Pavilion in the consolation game of the Christmas Kettle Classic.

 Freshman Trevor Booker had his best offensive game of his young career in the win over Appalachian State. The native of Union, SC scored 15 points in just 21 minutes thanks to 7-9 field goal shooting. He also had four dunks, four rebounds and three blocked shots. Booker leads the Clemson and is eighth in the ACC in FG% at .676.

 Vernon Hamilton has 15 assists this season and needs just six to reach 300 for his career. He just went over the 300 mark in career rebounds last week and now has 304 for his career.

 Clemson starting forward Sam Perry missed the second half against Appalachian State with a mild concussion, but he is expected to return for the Mississippi State game on Tuesday evening.

 Mississippi State enters Tuesday’s game with a 2-1 record. All three of the contests have been at home, victories over Nicholls and Loyola Marymount, and a 74-63 loss to Winthrop.

 Mississippi State won 15 games last year, but had won at least 20 games in each of the four previous years.