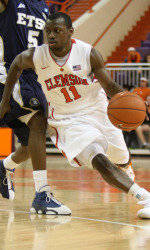 QUICK FACTS  Clemson and Georgia Tech meet for the 120th time on Saturday. The Yellow Jackets are one of the Tigers’ oldest rivals, as the series dates to 1912-13, the second season of Clemson basketball.  The Tigers have held the upper hand recently in the series. Clemson owns a 9-4 lead in games played since the 2005-06 season, including a current streak of three straight.  Saturday’s matchup will be the first meeting between Clemson’s Brad Brownell and Georgia Tech’s Brian Gregory, even though both spent 2006-10 coaching in the same city of Dayton, OH. Brownell was at Wright State, while Gregory was the head coach at Dayton.  Former Clemson assistant Josh Postorino is now an assistant at Georgia Tech. He helped the Tigers to three consecutive NCAA appearances from 2008-10, his first year as director of operations and his final two seasons as an assistant coach.  Clemson has dropped three straight ACC games by a total of 12 points. The Tigers’ lone conference win was by a 20-point margin over Florida State, so Clemson is +8 in scoring through a quarter of conference play.  The Tigers lead the ACC in conference games only with 9.3 steals per game. Clemson has had eight or more steals as a team in all four games, including a high of 10 against Boston College and Miami.  Tanner Smith and Andre Young, two natives of the state of Georgia, are a combined 28-of-49 from three-point range in their careers against Georgia Tech.  Smith is coming off a 23-point outing at Miami, the second-best single-game scoring mark of his career. He tied a career-high with four three-point goals as well.  Young tallied four steals against Miami and moved past former teammate Demontez Stitt and into a tie for eighth (James Mays) on Clemson’s all-time list with 166 career steals.  K.J. McDaniels reached double figures for the first time since the game against UTEP in Hawaii, and for just the second time this season when he scored 11 at Miami.  Catalin Baciu logged a career-high 19 minutes at Miami and responded with 10 points, which matched his career high.  Today’s honorary captain is Randy Mahaffey, a member of the school’s 100th year anniversary all-time team.