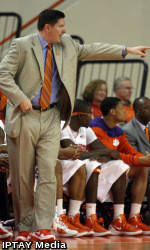 QUICK FACTS  Clemson and Virginia meet for the 118th time on the hardwood in men’s basketball Tuesday. The Cavaliers own the series 66-51, including 39-17 in Charlottesville, but the Tigers have won three of the last five in the series.  Clemson comes into the game having won two straight ACC games to even its league record at 3-3 on the season. The Tigers defeated Georgia Tech and Wake Forest at home on consecutive weekends.  Tuesday’s game at Virginia will be Clemson’s first of five on the road in the ACC over its next seven contests, spanning a total of 22 days. It will be the first of two in the state of Virginia this week, as the Tigers play at Virginia Tech on Saturday.  Tuesday’s game will feature the top two scoring defenses in the ACC. Virginia leads the conference by allowing just 50.6 points per game. Clemson is second, yielding 59.7 points per game to the opposition.  Clemson Head Coach Brad Brownell won his 200th career game with the victory over the Deacons on Saturday. He has a record of 200-106 in his 10th season as a head coach at the Division I level.  Clemson has increased its scoring offense during conference play. Through six games, the Tigers are averaging 68.3 points per game, nearly five points higher than their average during the non-conference portion of the schedule.  December graduates Bryan Narcisse and Tanner Smith were presented their diplomas prior to Saturday’s game against Wake Forest, because both missed the ceremony due to the trip to Hawaii for a tournament. Narcisse responded with a career-high 11 points, while Smith was efficient with 13 points, four rebounds and four steals.  Andre Young is seventh among all ACC players in conference play with a scoring average of 16.3 points per game. He has scored 48 over the Tigers’ last two contests.  On Saturday, both Devin Booker and his older brother Trevor scored 16 points in wins for their respective teams. Devin made 6-11 field goals and 4-4 free throws for his 16 points against Wake Forest, while former All-ACC forward Trevor posted 16 points without a miss in six field goal and four free throw attempts. Trevor helped the Wizards to a 102-99 victory over the Charlotte Bobcats.