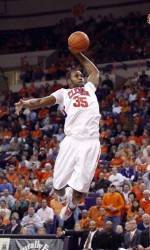 QUICK FACTS  Clemson and Texas A&M will meet for just the sixth time in the series history on Thursday. It will be the first meeting between the two since the 2005 NIT, when the Aggies pulled out an 82-74 win at home over the Tigers. Cliff Hammonds had a career-high 26 in the loss that day.

 The Aggies enter Thursday’s game with a 3-0 record on the season. The leading scorer so far on the season for the Aggies is Donald Sloan, who is averaging 20 points per game. Texas A&M was an NCAA Tournament team a year ago under Head Coach Mark Turgeon.

 This will be the program’s first trip to the state of California for men’s basketball since 1989. Clemson previously played a pair of games in San Diego in the Texaco Star Classic that year. The Tigers, led by star post players Dale Davis and Elden Campbell, lost to Villanova and defeated Niagara.

 The Tigers are hitting 45.5 percent on three-point attempts so far this season, while holding opponents to under 30 percent from behind the arc.

 David Potter ranks second on the team in scoring (12.0 ppg) and is coming off three consecutive double figure efforts for only the second time in his career. He posted a career-high 17 points in the Nov. 17 game against Liberty. The senior forward leads the team with 13 three-point goals on the season and is atop the ACC leaderboard with a 72.2 percent accuracy.

 Trevor Booker leads the team in scoring (13.8 ppg) and rebounding (10.0 rpg) and is second on the squad with five blocked shots. He has two double-doubles on the season and 23 for his career, which makes him the ACC’s active leader in that category.

 Booker is also the ACC’s active leader in rebounds (832), and blocked shots (209). He needs just two blocks to pass Dale Davis for fourth on the school’s all-time list.

 Andre Young is off to a great start in his sophomore season. The Albany, GA native is averaging 10.5 points per game off the bench. He leads the team in steals (12) and is second in three-point shooting (57.1 percent).

 Clemson’s four freshmen have combined to average 22 points and 11.5 rebounds per game. Noel Johnson is the leading scorer of the group at 8.0 points per game, while Devin Booker is averaging 4.3 rebounds per game to lead the rookie contingent.