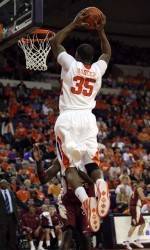 CLEMSON, S.C. (AP) -Trevor Booker scored 18 points and Clemson won back-to-back games for the first time in almost a month with a 74-66 victory over Miami on Saturday.

The Tigers (18-7, 6-5 Atlantic Coast Conference) had won consecutive contests since taking three straight the first half of January – and had been in danger of falling out of the ACC chase.

Instead, Booker’s inside play and Clemson’s outside shooting touch were too much for the Hurricanes (17-8, 3-8).

Andre Young had four of the Tigers’ nine 3-pointers.

Malcolm Grant had 13 points to lead Miami, which has lost seven of its last nine games.