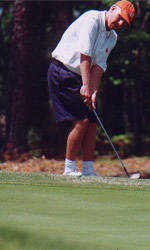 Thanks to under-par performances by four of its five players, the Clemson golf team stands in third place heading into play on Saturday at the NCAA men’s golf tournament at Duke University. Rain and lightning suspended play at 11:54 AM on Friday, halting play in the middle of the third round. The third round will be completed on Saturday morning with the final round to follow immediately.

When the rains came, Clemson stood in third place at one-under par. Larry Penley’s Tigers were eight-under-par for their play on Friday. Clemson’s five players had all completed at least 14 holes at the time of the delay. Clemson still trails Arizona by 13 strokes entering Saturday, but the third-ranked Tigers jumped over five teams on Friday.

Arizona leads the event at 14-under-par, while Florida is second at eight-under. Clemson is third at one-under, followed by top ranked Georgia at +2. Surprising Augusta College, like Clemson eight-under-par on Friday, stands fifth at +2. Wake Forest is sixth at +3, followed by East Tennessee State at +5. Arizona State and Georgia Tech are tied for eighth at +7.

Lucas Glover and Gregg Jones were both three-under par for their play on Friday, while John Engler and D.J. Trahan were one-under. Jani Saari was +1 for his 15 holes of play on Friday.

Clemson got off to a hot start on Friday. The Tigers played the front nine in eight-under-par as a team. Leading the way was freshman Gregg Jones, who turned the front nine in 33. The rookie from Florence, SC, had birdies on the second, fifth and seventh holes to record the 33, the best nine-hole score by a Tiger in the national tournament. Jones is the offspring of Clemson graduates, who were both in attendance at the Duke University Course on Friday. Jones continued his fine play with a birdie on the 10th hole to reach four-under. He bogeyed the 15th hole, but came back with a par on 16. He was the only Tiger to finish 16 holes on Friday.

Seniors Lucas Glover and John Engler each made the turn in two-under par. Engler made seven straight pars, then made birdies on eight and nine. Glover also closed the first nine strong, making birdies on eight and nine. On the ninth hole, a par five, he went over the green in two. He had a tricky side-hill lie in the rough above a trap, but chipped the ball to within a foot of the hole from 20 yards away. He actually hit the pin on the eagle attempt. Glover continued his fine play on the par five 11th. Another par five, Glover hit a 240-yard three wood over the green and into a bunker. With little green to play with, Glover hit a perfect sand shot into the hole for an eagle. It was the first eagle of the tournament for a Clemson golfer.

D.J. Trahan turned in 37, fifth among the Tiger golfers. But the sophomore caught fire on the back nine. He made consecutive tap-in birdies on the 13th and 14th holes. Saari had a 34 on the front, but a double-bogey seven on the par 5 11th hole limited his effectiveness.

Saturday, the Tigers will be striving for a fifth straight top 10 national finish. That would be the first time since the 1973-79 era that a Clemson athletic program had five straight top 10s. The Clemson soccer team had seven top 10 finishes in succession during that period. Saturday will also mark the final day of competition for seniors Lucas Glover.

Both players rank one-two in Clemson history in scoring average and rounds at par or better.

“We got off to a good start today, that was important,” said Penley. “Now we just have to finish the round strong. Lucas and Gregg Jones were on fire early. Lucas made a birdie on one and Gregg had a birdie on the second and the fifth. We needed to get in a red-gun mode early. It carried over to the other players. We have been playing aggressively.

“If Arizona just maintains what they are doing, it will take a super human effort to catch them on Saturday. I keep waiting for them to come back to the pack, but they don’t. You look on the scoreboard and see Ricky Barnes and one over, but the team is at seven under. Chris Nallen, their number-four player shoots a 29 on the front side and that has been the difference. It is Arizona’s tournament to win, they will have to let us back in. But, there is still a lot of golf left.”