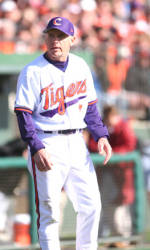 Clemson vs. South Carolina Clemson (5-1), ranked as high as #13 in the nation, will play host to #3 South Carolina (4-1) on Sunday at Doug Kingsmore Stadium. First pitch for Sunday’s game between the top-15 rivals is scheduled for 2:00 PM. The game will be shown live via webcast at ACCSelect.com. The game will also be broadcast live on the radio by Clemson Tiger Sports Network. Live stats will be available at ClemsonTigers.com as well. On Saturday, the Gamecocks defeated Clemson by a score of 10-1. The two teams will also play two more contests in April, including on April 9 at Sarge Frye Field and April 16 at Doug Kingsmore Stadium.

The Gamecocks South Carolina, led by 12th-year Head Coach Ray Tanner, enters Sunday’s game against #13 Clemson with a 4-1 record after downing the Tigers 10-1 on Saturday. The Gamecocks, who have yet to play a game on the road, are ranked as high as #3 in the country. The Gamecocks, who are averaging 11 runs per game, are hitting .322 with a .443 on-base percentage. The team has totaled 11 homers, including four by Reese Havens. Havens also leads the club in batting average, as he is 10-for-19 (.526) with 11 runs scored and 14 RBIs in just five games. The pitching staff has a 4.02 ERA and .264 opponents’ batting average. Fifteen different Gamecocks have already seen action on the mound this season. South Carolina is fielding at a .976 clip as well.

The Tigers Clemson enters Sunday’s game against #3 South Carolina with a 5-1 record after suffering its first loss of the season on Saturday in Columbia. The Tigers are hitting .333 with a .406 on-base percentage. Doug Hogan is hitting .417 with two homers and five RBIs. He also brings a 21-game hitting streak into Sunday’s game. Wilson Boyd leads the team in runs scored (9), homers (5), and RBIs (11), while Kyle Parker is hitting .389 and has had at least one hit in each of his first five games at Clemson. The pitching staff has a 3.74 ERA and .266 opponents’ batting average. Righthander Matt Vaughn has two saves and has struck out six without allowing a walk. The Tigers are fielding at a .968 clip as well.

Clemson Rallies Late to Top Cougars 7-6 Clemson, ranked #13 in the nation, hit three homers and scored two runs in the eighth inning to rally past College of Charleston 7-6 at Patriots Point Stadium on February 29. With the Tigers trailing 3-0, Doug Hogan hit back-to-back homers to tie the score in the third inning. Kyle Parker each had three hits to lead Clemson’s 13-hit attack, which included seven extra-base hits.

Havens Leads Gamecocks Over Tigers 10-1 Reese Havens hit a grand slam and totaled five RBIs to lead #3 South Carolina to a 10-1 victory over #13 Clemson at Sarge Frye Field on March 1. Havens’ two-out grand slam in the second inning came after a costly error, one of two by the Tigers that led to six unearned runs in the game. Clemson, who had eight hits, could not string together hits, as it left nine runners on base to the Gamecocks’ four. J.D. Burgess’ double in the seventh inning plated Alex Lee for the Tigers’ lone run. Lee also went 2-for-2 with a walk. Mike Cisco pitched 7.1 strong innings to earn the win. Ryan Hinson suffered the loss even though he allowed just six hits, one earned run, and no walks with five strikeouts in 6.0 innings pitched.