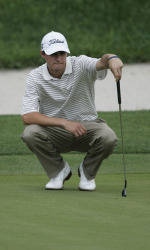 New London, NC–Kyle Stanley shot a two-under par 70 on Sunday to lead Clemson to a third-place team finish at the 54th annual ACC Men’s Golf Tournament at the Old North State Club at Uwharrie Point, NC. Virginia Tech and Georgia Tech tied for the team title at 10-under-par 854, while the Tigers were third at 858.

It marked a miraculous co-championship for Virginia Tech, who entered the tournament ranked 47th in the Sagarin team rankings. Individual champion Jonas Blizt of Florida State shot a 65 on Sunday, the round of the week by any player, and finished at eight under par 208. He was ranked 37th in the nation entering this weekend’s play.

Stanley had a strong performance and held the Tigers in the team race for most of the day. In fact, Clemson was tied for the team lead with six holes left with a nine-under par team score. Stanley birdied the first hole, then made nine straight pars before he made birdies on the 11th and 12th holes. His birdie on the 12th was a miraculous chip in from 30 yards away.

The freshman from Gig Harbor, WA was still three-under for the day and seven under for the tournament, just one stroke off the individual lead, as he went to the 17th tee. With the Clemson team three off the team lead he attempted to hit a shot directly at a tucked pin, but he pulled the ball slightly into the hazard next to the green. After five minutes of searching for the ball, it was found by former Clemson All-America baseball pitcher Harold Stowe, who was following the Tiger team all day.

But, the ball was in an unplayable position, so Stanley had to return to a drop area on the other side of the water. He failed to get up and down and had to settle for a double bogey. He then birdied the final hole to finish his day and tournament on a bright note. The double bogey on 17 was the only blemish on his card on Sunday and one of just four holes in the 54 over the weekend in which he failed to score a par or better.

Tanner Ervin also had a top 10 finish for the week, shooting a 214 score for the three rounds. He finished with a 71 on Sunday, giving him three consecutive rounds of par or better. The seventh-place finish was his second top 10 of the year and his highest finish ever in a tournament. He finished the event with 13 birdies and 11 bogeys for his 54 holes and joined David May as the only Tigers who went the weekend without a double bogey.

David May fired his third consecutive 72 on Sunday and finished in 12th place with a 216 score. He gave the Tigers a chance with birdies on 17 and 18 on Sunday. The birdie on 17 was the result of a made putt from 40 feet and he made a 15-footer on the par five 18th. It marked the second straight solid ACC Tournament for May, who finished ninth last year with a 211 score on the same course.

Sam Saunders finished 19th in his first ACC Tournament with a 218 score.

He had his best round on Sunday with an even par 72. He had four birdies on Sunday, including the 13th and 15th holes. But he scored a double bogey on the eighth hole when he drove his ball out of bounds due to an unlucky break. His drive hit the branch of a tree on the left side of the fairway and kicked directly left, landing out of bounds by three yards.

Clemson sophomore Phillip Mollica shot a 78 on Sunday and finished the 54 holes with a scored of 236.

Sunday’s round completed Clemson’s regular season schedule. The Tigers will await an NCAA regional bid in early May and will begin play at one of three regional tournaments May 17.