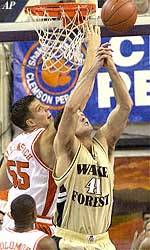 Clemson Falls To No. 24 Wake Forest

The Demon Deacons (18-8, 7-7 Atlantic Coast Conference), who won just their second conference road game, dominated from the start and led 41-9 at halftime.

Tony Stockman scored 14 points to lead Clemson (11-15, 2-11), which looked nothing like the team that upset then-No. 1 North Carolina on Sunday.

Will Solomon, the ACC’s leading scorer at 21.5 points per game, did not score in the first half. He shot 0-for-3 from the field and turned the ball over five times in the first 20 minutes, and finished with nine points.

The nine first-half points marked a season low for a half for the Tigers this season, and was the least a team scored in a half against the Demon Deacons.

Coach Larry Shyatt tried everything to get the Tigers out of their doldrums, including calling two timeouts and picking up a technical – all in the first 10 minutes. But Wake Forest’s defense forced Clemson into rushed shots, and the Tigers shot 0-for-7 from 3-point range in the first half.

The victory moved the Demon Deacons into a tie for fourth place in the ACC, just a half-game behind Maryland and Virginia.

The 32-point loss marked the end of a strange week for Clemson, which sandwiched the North Carolina win between a 34-point loss to North Carolina State on Feb. 14, the Tigers’ worst loss in 45 years, and Wednesday’s loss.

Clemson’s offense improved in the second half, but Wake Forest’s lead was 30 or more points for most of the half.

The Clemson players and coaches were clearly frustrated. Chris Hobbs got a technical foul in the first half, then an intentional foul that put him on the bench with his fifth foul in the second half.