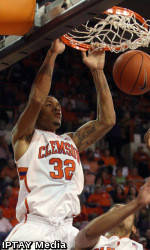 TALLAHASSEE, FL – Clemson allowed 49 points in the first half, its highest total in two seasons under Brad Brownell, in an 80-72 loss to No. 22/22 Florida State on Sunday at the Donald L. Tucker Center. The game was somewhat surprisingly an offensive display, after both teams came in ranked among the national leaders in a pair of important defensive statistical categories. The loss dropped the Tigers to 16-14 to conclude the regular season, 8-8 in the ACC. Florida State finished 21-9, 12-4 in league play.

Andre Young led three Clemson players in double figures with 16 points on 7-of-12 shooting. Freshman wing K.J. McDaniels also had 16 points, including four dunks on the afternoon. The 6-foot-6 McDaniels added seven offensive rebounds, four steals and two blocked shots in an outstanding all-around effort. Devin Booker had a double-double with 10 points and 10 boards, while another Devin, freshman guard Devin Coleman, finished the game with nine points, all in the second half.

The Seminoles were led by tremendous field goal shooting, including over a 60 percent mark in the first half. Michael Snaer led the way for Leonard Hamilton’s team with a game-high 23 points, while senior post players Xavier Gibson and Bernard James chipped in 13 apiece. Florida State shot 50 percent for the game and was 11-for-19 from three-point distance.

Both teams started hot from the floor. Gibson matched his season scoring average in the first four minutes of the game with seven of Florida State’s first 13 points. The Seminoles pushed an early lead to as much as seven at 20-13 on a jumper by Bernard James. Clemson countered with layups from its big men, Devin Booker and Milton Jennings, to cut it to three.

The teams exchanged threes with eight minutes remaining in the half, as FSU’s Snaer connected on his second long-range goal before Clemson’s McDaniels made his seventh three-pointer of the season. Minutes later, Snaer’s third trifecta of the opening stanza gave Florida State its biggest lead at 32-23, prompting a Brad Brownell timeout.

The lead reached double digits and grew to as high as 14 in the first half as again Snaer sank a triple from the wing. Clemson cut it to 10 after a pair of free throws by Booker, but FSU ended the half with two deep threes from Ian Miller to make it 49-33 at the break.

Clemson trimmed a 16-point lead to seven at 58-51 behind the play of freshman Devin Coleman, who scored seven points in a matter of two minutes. A shot by Okaro White rolled around the rim and dropped to push the lead to 60-51, and then Gibson had a tip dunk to make it double digits again. The 6-0 run made it 64-51 in favor of the Seminoles with 9:09 remaining.

A putback dunk by McDaniels and then a mid-range jumper from Coleman cut it to 71-62, and later consecutive baskets by Young and Booker made it 74-66 in FSU’s favor with three minutes left. Booker’s bucket came off a steal from Coleman on one end and wraparound pass off the break. Clemson made it interesting by pulling within five at 75-70 on another dunk by McDaniels, but Coleman missed a driving shot attempt on the other end that would have made it 75-72.

The ACC Tournament will be held in Atlanta, GA at Philips Arena, home of the NBA’s Hawks. The first round gets underway with the 8/9 matchup at 12:00 PM on Thursday, March 8. Clemson’s seed and opponent will be known Sunday evening.