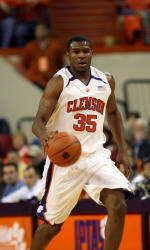 CLEMSON, S.C. (AP) – Trevor Booker scored 21 points, Terrence Oglesby had five 3-pointers and No. 10 Clemson beat No. 4 Duke 74-47 on Wednesday night, the first time the Tigers had consecutive wins over the Blue Devils in 13 years.

The Blue Devils’ run of success ended last March in the ACC tournament semifinals when Clemson beat them 78-74. Booker and the Tigers made sure the regular-season streak ended at Littlejohn Coliseum.

Unlike last week when they fought back from 13 points down to tie Wake Forest in the final minute before losing 70-68, the Blue Devils had no response to Clemson’s relentless attack.

Fans mobbed the court when it was finished, joyously celebrating what they hadn’t watched here since 1997 – a Clemson win over Duke.

Duke coach Mike Krzyzewski spent most of the second half in his seat, hands over his mouth. Three times he subbed his entire squad to find a spark, but the Blue Devils never got closer than 20 points over the last 9 minutes.

It was Duke’s fewest points this season, and its lowest scoring performance since a 54-51 win over Indiana in 2006.

The loss at Wake Forest dropped Duke from No. 1. This defeat might show the rest of the ACC what happens when you press the Blue Devils from start to finish.

The Blue Devils hit only three of their final 12 shots of the half, an 8-minute stretch where they committed seven of their 11 first-half turnovers.

One of the ACC’s most productive 3-point-shooting teams with almost seven a game, Duke was ice cold the first 20 minutes going 1-of-6 behind the arc. They finished 3-of-13 on 3s.