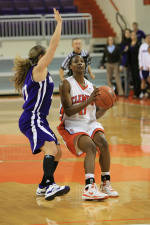 Clemson, SC – Lele Hardy keyed a second-half comeback with 15 points in the last 6:35 of the game to lead Clemson to a 60-57 victory over Ohio University in women’s basketball action at Littlejohn Coliseum. The win increased Clemson’s record to 7-2, its best start after nine games since the 2003-04 season. Ohio University fell to 2-5. Clemson will now take nine days off for final exams.

It was Clemson’s second consecutive thrilling victory this week. On Thursday, Hardy connected on a three-point shot at the buzzer to send the game into overtime and the Tigers went on a 78-75 win over Northwestern. Hardy scored 17 points after halftime in that game and 16 after halftime on Saturday.

Hardy made 8-16 shots for the game, including 7-8 in the second half and finished with 18 points. She also added 10 rebounds and had three steals to pace Clemson. Sthefany Thomas added 13 points, including Clemson’s last four points all in the last 13.3 seconds.

Jennifer Bushby led Ohio University with 16 points and 11 rebounds, her first career double-double. It was a season high in scoring and career high in rebounding for the 5-6 guard. Lauren Hmiel added 14 points and Jenny Poff scored 12 for the Lady Bobcats, who are coached by former Tennessee All-American Semeka Randall, who is in her first year as a Division I head coach.

Ohio University won the rebounding 33-25, but Clemson forced 23 turnovers and committed just 17. The teams were virtually even in field goal shooting for the game, but Clemson shot 15-27 from the field in the second half, 56 percent, compared to 7-22 for Ohio University, 32 percent.

It was a 38-22 lead for Ohio University with 17 minutes left. Clemson worked the deficit to 50-40 with 6:50 left when Hardy took over. She made a steal at midcourt and drove in for a layup to cut the margin under double digits (50-42) for the first time since the early part of the first half.

Thomas then drove from the right and scored with just four seconds left on the shot clock and 17 seconds left in the game to give Clemson a 58-55 lead. Bushby then made two free throws with nine seconds left to cut the margin back to one point.

After a timeout, Hardy got the ball inbounds to Thomas, who calmly made both ends of a one-and-one to give Clemson the 60-57 lead. A contested three-point shot by Bushby at the buzzer failed and Clemson had the victory.

“We had a great comeback today,” said head coach Cristy McKinney. “We are a very young team and it shows sometimes on the court; however, we came out and never gave up. Intensity throughout the game was a major problem for us today. We didn’t play with a lot of intensity until the end of the game. Now, we just need to play with that intensity the entire 40 minutes of our future games. Again, great comeback, and win today. I’m proud the girls never gave up.”