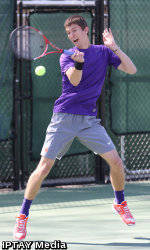 CLEMSON, SC – Clemson defeated Maryland 5-2 in an Atlantic Coast Conference men’s tennis match at Clemson, SC Friday evening. Clemson improves to 7-8 overall, 3-1 in the ACC. Maryland falls to 4-10 overall, and 1-3 in league play. The Tigers are ranked 63rd according to the latest ITA poll. Today’s match was moved indoors due to inclement weather in the Clemson area.

After Maryland won the doubles point, the Tigers went to work in singles and won five straight singles matches.

“I give a lot of credit to our team and them being ready to play,” said Clemson Head Coach Chuck McCuen. “The whole team played to the highest level and left everything they had on the court. We have been emphasizing this all season and today everyone came ready to play. We were operating on all cylinders.

Ayrton Wibowo clinched the match for the Tigers as he defeated Sergio Wyss of Maryland at number three singles 7-6, 2-6, 6-1. Zachary Rigsby gave Clemson its fifth point of the day when his opponent Tommy Laine retired because of injury. Rigsby won the first set 6-1.

“Maryland is a well-coached team. We really prepared for this match earlier in the season,” said McCuen. “We played a hard schedule to begin the year against higher ranked opponents, and now that experience of tough losses is paying off now that we are at this stage of the season. Yannick is leading by example. He is playing well. We have to keep this intensity level as we have more hard matches left this season,” said McCuen.

This was the 59th meeting between Clemson and Maryland in men’s tennis. The Tigers lead the overall series 44-15. The Tigers have lost only two matches to the Terrapins since the 1977 season.

Clemson will play host to Boston College on Sunday morning at 11:00 a.m. in another Atlantic Coast Conference match. All the action will take place at the Hoke Sloan Tennis center adjacent to Historic Riggs Field.