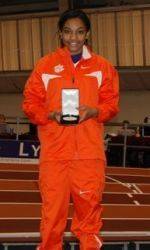 BLACKSBURG, VA – Clemson captured the school’s second-ever ACC indoor championship for women’s track & field on Saturday by blowing away the competition.  The Tigers totaled 145.5 points and their closest competition over the course of the three-day meet was Florida State with 93.  It was the school’s first ACC indoor championship in track & field since the men’s team won the 2002 crown, and the first for the women’s team since 1992.

The Clemson women won five individual events, then capped the incredible weekend by winning the school’s first indoor 4x400m relay since 2004 in ACC record fashion.  Clemson’s total of six championships on the women’s side were also the most in program history at one conference indoor meet.

“It’s hard for me to put into words,” said Lawrence Johnson, Clemson’s Director of Track & Field who is in just his second season at the school.  “The women have worked so hard all season long.  Every time we go into our indoor facility, that banner’s (1992 championship) up there as a reminder that we need to work harder to get back to that point.  We didn’t want to do just enough to win, we really wanted our kids to compete to make sure that we had enough points at the end of the day.”

April Sinkler became the first female in Clemson history to surpass the six-foot clearance in the high jump.  She cleared a school record and NCAA automatic height of 6’0.75″.  She came through in the clutch multiple times, clearing three separate heights on her final attempt.  Sinkler defended both her indoor crowns from a season ago, as she won the long jump on Friday as well.  Linda Buchholz was fourth on Saturday, clearing 5’9.75″ and earning five big points for Clemson.

“April was feeling good today, so we really wanted to go for it,” Johnson said of Sinkler’s effort.  “Her performances this weekend were outstanding, and she’s so confident.  I wish we had 12 more just like her.”

The women’s 4x400m relay not only won on Saturday, they did so with an ACC record time.  The freshman group of Brittany Pringley, Brianna Rollins, Sonni Austin and Jasmine Edgerson posted a season-best 3:35.76 to finish nearly four seconds ahead of runner-up Virginia Tech.

The Miami native Rollins capped a brilliant individual effort by winning the 200m dash, the third final she competed in Saturday.  She became the first Clemson female to win gold in the indoor 200m event since Silja Ulfarsdottir in 2004.  Rollins posted a season-best time of 23.69, sixth-best in Clemson history.  Stormy Kendrick was fourth with a time of 23.91.

Rollins picked up her first-ever all-conference honor after winning the bronze in the 400m dash.  She had an NCAA provisional time of 54.01, which is also the fifth-best time in school history.  Rollins is the first All-ACC performer for the women’s team in the quarter mile since Ulfarsdottir in 2004.  Sonni Austin was fifth (54.66) and Brittany Pringley came across seventh (54.84), both with personal bests.

Kendrick, yet another freshman, earned her first individual All-ACC honor as well Saturday.  She was third in the women’s 60m dash with a time of 7.44.  Kendrick is the first female to earn all-conference recognition in the 60m dash since Terri Robinson did so in 2002.  Teammate Kristine Scott finished seventh.

Rollins was fifth in the 60 hurdles final, posting a time of 8.27.  Michaylin Golladay ran a lifetime best 8.31 in the race, finishing sixth overall.  Mamona was seventh with a time of 8.46.

“Brianna contributed to the success of this team in a big way,” Johnson said.  “We lined her up in just about every event possible, because she’s so talented.  She embraced our plan, executed well, and she had an amazing weekend.”

Kim Ruck, another star from the weekend for Clemson, competed again Saturday.  This time around, the sophomore placed fourth in the 3000 meter run.  A day after completely dominating the field in the 5K, she turned out an NCAA provisional time of 9:32.21 and provided insurance points for the Tigers.

Patricia Mamona earned her ninth career All-ACC accolade on Saturday, once again finishing in the runner-up position in the triple jump.  The native of Portugal had a top mark of 43’11.75″.  Sinkler finished fourth in the event with a mark of 42’0″.

The Clemson men’s team finished sixth in the team standings, but was only two points behind fifth-place finisher NC State.  The Tigers finished with 61 points.  Florida State won the men’s team title again, this time with a total of 107 points.

The highlight of the final day for the men’s team was the runner-up finish produced by the 4x400m relay.  The group of La’Mont Jackson, Jordan Rispress and Miller Moss turned out a season-best and NCAA provisional time of 3:10.21.  The Tigers were paced by an excellent second leg (47.28) from Jackson, a freshman from Winston-Salem, NC.

Murdock collected his first all-conference accolade by finishing third in the 60m dash.  He produced a career-best time of 6.72 in the final.  He also ran well in the finals of the 200m dash, finishing sixth overall with a season-best time of 21.32.

Spencer Adams overcame a slow start in the 60 hurdles to finish fourth in his first-ever trip to the ACC Indoor Championships.  The red-shirt freshman out of Charlotte, NC posted a time of 7.89.  Teammate Charlton Rolle was sixth (7.99).

Jasen Turnbull was impressive in the men’s 800m run.  The junior from Michigan finished fifth after a strong push over the course of the final lap.  He had a time of 1:52.49 in Saturday’s final.

Alex Padgett was strong in the shot put for the men’s team.  He scored with a fifth-place effort Saturday.  Padgett produced a personal best with a throw of 57’5.5″ on his third preliminary attempt.  His mark ranks fifth-best in Clemson history for the indoor shot put.