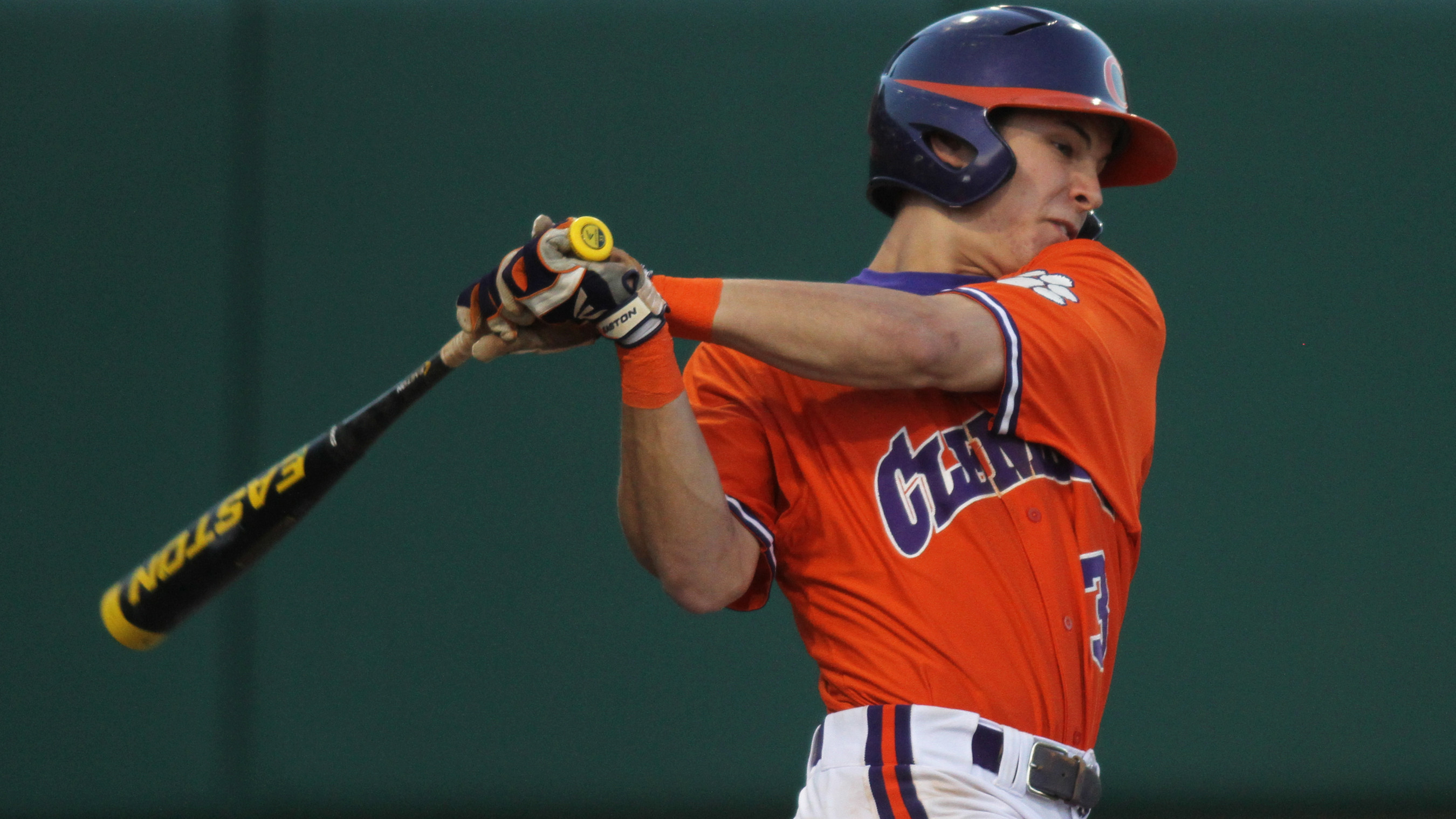 Last Week’s Game Notes & RecapsClemson, ranked as high as #17 in the nation, went 5-0 for the second week in a row this past week. The Tigers won both midweek games, a 12-9 win at Western Carolina on Tuesday and a 5-4 walkoff win at home over Presbyterian College on Wednesday. Then over the weekend, the Tigers swept Wake Forest at home, including two close wins.

On the week, the Tigers outscored the opposition 32-19 and batted .320 with a .446 slugging percentage and .426 on-base percentage. They also totaled three doubles, five triples, three homers, 35 walks against only 22 strikeouts, and 15 stolen bases. Clemson fielded at a .966 clip as well.

The Tiger pitching staff had a 2.11 ERA and .251 opponents’ batting average on the week. The staff also allowed 43 hits and 17 walks with 37 strikeouts in 47.0 innings pitched.

Jon McGibbon‘s run-scoring single in the ninth inning coupled with two more ninth-inning runs propelled Clemson to a 12-9 win at Western Carolina on April 9. The Tigers scored nine combined runs in the first four innings to take a 9-3 lead, but a costly Clemson error helped Western Carolina plate six runs in the seventh inning to tie the score. McGibbon went 3-for-4 with four RBIs and three runs to lead the Tigers, who outhit the Catamounts 14-12. Andrews pitched 1.1 perfect innings in relief to earn the win, then Firth pitched a scoreless ninth inning to record the save.

Krieger then hit a two-out, walkoff single in the ninth inning to give Clemson a 5-4 win over Presbyterian College at Doug Kingsmore Stadium on April 10. The Blue Hose rallied from a 3-1 deficit to take a 4-3 lead in the seventh inning, but Krieger led off the eighth inning with a triple on a 1-2 pitch and scored on a wild pitch to even the score. Krieger then came through with a single down the right-field line on an 0-2 pitch in the ninth inning to cap a four-hit night for the freshman. Campbell pitched a perfect ninth inning with two strikeouts to earn the win.

Clemson swept Wake Forest by a combined score of 15-6 at Doug Kingsmore Stadium from April 12-14. The Tigers outhit the Demon Deacons .291 to .233 and totaled two doubles, four triples, two homers, 21 walks against only 13 strikeouts, and eight steals. Shane Kennedy went 5-for-11 with three walks and two steals. The Tiger pitching staff had a 1.24 ERA and 26 strikeouts against 11 walks while allowing only four extra-base hits, all doubles. In 11.1 innings pitched, the Clemson bullpen allowed just four hits, no runs, and three walks with 11 strikeouts.

In game-one on April 12, every Tiger starter had at least one hit in Clemson’s 8-2 win over Wake Forest. Clemson built a 4-0 lead and pulled away with three runs in the sixth inning. Clemson outhit Wake Forest 13-8 and totaled 10 walks against only two strikeouts. Bouwlare hit a solo homer in the first inning, while Duggar, Joe Costigan, and Steve Wilkerson hit one triple apiece. Eight different Tigers scored one run, while six different Tigers had one RBI. Daniel Gossett allowed just one earned run with nine strikeouts in 6.0 innings pitched to earn the win.

In game-two on April 13, Matthew Crownover and three relievers combined on a seven-hit shutout in Clemson’s 1-0 win over Wake Forest. Crownover gave up five hits and no runs with four strikeouts in 5.1 innings pitched, then Firth pitched 2.0 perfect innings with two strikeouts to record the save. Clemson allowed only one Demon Deacon to advance past second base. The Tigers scored their lone run in the fifth inning on Krieger’s two-out single to score Duggar, who reached as the leadoff batter on an error. Wake Forest outhit Clemson 7-5, but could not score any of its 11 baserunners in the game.

In game-three on April 14, Duggar hit a two-run, walkoff homer in the 11th inning to lift Clemson to a 6-4 win over Wake Forest. The Demon Deacons battled back from deficits of 2-0 and 4-2 to tie the score each time, but with two outs in the 11th inning, Duggar hit a 2-1 breaking pitch over the fence in right field for a two-run homer to end the game. Duggar went 3-for-5 with four RBIs to lead the Tigers’ 12-hit attack. Firth gave up just one hit and no runs with four strikeouts in 3.0 innings pitched in relief to earn the win.

2013 Season NotesClemson has a 26-11 overall record and 12-6 ACC mark on the season. A week after moving into the polls for the first time in 2013 (at #17), Clemson continued its winning ways by upping its winning streak to 10 games, its longest winning streak since its 17-game winning streak in 2006. The Tigers have won seven ACC games in a row as well.

The Tigers will return to action on Wednesday night when they host Furman, then Clemson will travel south to face Miami (FL) in a three-game series on the road starting Friday.