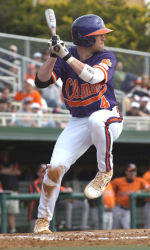 Notes Clemson went 3-2 in five home games this past week, including a pair of midweek wins where the Tigers outscored the opponents by a combined score of 29-8. Then over the weekend, Miami (FL) won two of three games over the Tigers.

Ben Paulsen went 5-for-5 with a homer and six RBIs in #11 Clemson’s 14-2 victory over Gardner-Webb at Doug Kingsmore Stadium on March 27. Paulsen became the first Tiger to total more than three hits and three RBIs in a game in 2007, as he hit a three-run homer in the third inning, and added a double and four runs scored. The Tigers had 21 hits in all, including hits by 12 different players and all nine starters. Taylor Harbin added three hits and two RBIs. Matt Vaughn pitched 5.0 effective innings in a starting role to record the win, while four relievers combined to pitch the final 4.0 innings to close out the game. Head Coach Jack Leggett was not at the game, as he was with his ailing father in Vermont.

Behind 16 hits, Clemson defeated Western Carolina 15-6 at Doug Kingsmore Stadium on March 28. The Tigers scored in six straight innings beginning with the second frame. Ten different Tigers had at least one hit, while 12 different Tigers scored at least one run. Harbin had three hits and three RBIs, while Doug Hogan went 3-for-4 with a double and three runs scored. Paulsen added a two-run home run and three RBIs, and Marquez Smith tallied three RBIs as well. Matt Zoltak earned his first career win, as he pitched 1.2 scoreless innings in relief. The Catamounts committed four errors, which led to seven unearned runs allowed by their pitchers.

Miami (FL) won the first and last games of a three-game series at Doug Kingsmore Stadium from March 30 to April 1. The Hurricanes outscored the Tigers 18-13 and outhit Clemson .276 to .268. Smith hit a team-best .444 with four walks. Clemson’s pitchers had a 5.00 ERA and struck out 29 batters.

In game-one on March 30, Miami scored 10 unanswered runs to come away with a 10-3 victory over Clemson. The Tigers took a 3-0 lead in the third inning, but the Hurricanes responded with four runs in the fourth inning, highlighted by Dennis Raben’s three-run homer. Miami added three runs in the seventh inning on Yonder Alonso’s three-run long ball, then Alonso added a solo homer in the ninth inning. The loss snapped Clemson’s 21-game home ACC winning streak and seven-game winning streak over Miami. P.J. Zocchi suffered his first loss in 11 career decisions. Brad Chalk’s 50-game streak of reaching base also came to an end.

In game-two on March 31, three Tiger pitchers limited Miami to only three hits in Clemson’s 4-1 victory. Starter Stephen Clyne pitched 2.0 hitless and scoreless innings, while Daniel Moskos pitched a perfect ninth inning to record the save. All three of Miami’s hits came consecutively in the fifth inning when the Hurricanes scored their only run of the game. Clemson scored three runs in the third inning, aided by a Hurricane error. The Tigers tacked on another run in the fifth inning thanks in part to another error. Chalk had a game-high three hits, as Clemson totaled seven hits in the game.

In game-three on April 1, Miami rallied after an 89-minute rain delay to defeat Clemson 7-6. With the Hurricanes ahead 4-2, the Tigers tied the score in the fifth inning when Addison Johnson hit a run-scoring double and came around to score on a passed ball. The Tigers took the lead the following inning on Paulsen’s RBI double to left field. But pinch-hitter Gus Menedez’s two-out, bloop single in the seventh inning plated two runs and gave Miami the lead for good. Johnson led the Tigers with three hits and two RBIs. A throwing error by David Kopp on a potential double play led to three unearned runs for the Hurricanes in the fifth inning. Each team totaled three double plays as well.

The pitching staff had a 4.20 ERA, as all four Tigers who pitched at least 5.0 innings had an ERA under 2.00 during the week.

Clemson will play a midweek, home-and-home series with Georgia before traveling to Blacksburg, VA to take on Virginia Tech over the weekend.