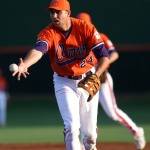 Notes Clemson went 3-2 in five games this past week, including splitting a pair of midweek games and winning two of three games at #2 Florida State over the weekend.

Behind five home runs, including two by Andy D’Alessio, #16 Clemson blasted Wofford 12-3 at West End Field in Greenville, SC on May 8. The Tigers scored five runs in the second inning and cruised to victory, scoring in all but two of the eight innings in which they batted. Clemson hit five solo homers, as Doug Hogan, Ben Paulsen, and Taylor Harbin also hit long balls. Clemson totaled 15 hits, including nine extra-base hits, and nine walks. Six different Tigers had at least two hits. D’Alessio went 3-for-4 with a double, two homers, and three RBIs. Alex Lee went 2-for-3 and reached base four times as well. Starter D.J. Mitchell pitched 5.0 scoreless innings with five strikeouts to earn the win.

Four Furman pitchers held #16 Clemson to six hits in the Paladins’ 6-3 victory at Doug Kingsmore Stadium on May 9. Reliever Spencer Hale limited Clemson to one run on three hits in 3.1 innings pitched to pick up the win. Nicholas Karow pitched 1.2 scoreless innings to earn the save as well. D’Alessio’s two-out, two-run single in the third inning gave Clemson a 2-1 lead, but the Paladins scored the next five runs. Paul Ortenzo’s two-run double in the sixth inning and Bobby Hubbard’s two-run triple in the eighth inning highlighted Furman’s upset win. Harbin was 2-for-3 with a home run to lead Clemson, who was just 1-for-15 with runners on base. Five Tiger pitchers combined for 14 strikeouts as well.

The #16 Tigers then won two of three games at #2 Florida State from May 11-13 at Dick Howser Stadium. It was the Tigers’ first series win in Tallahassee since 1993. Clemson hit .306 in the series and totaled 15 extra-base hits, including 10 doubles and five home runs. D’Alessio was 6-for-13 (.462) with five runs scored, a double, three homers, and six RBIs. Hogan added five hits, including three doubles. The pitching staff had a 6.23 ERA, while the Tiger defense turned six double plays as well.

The Seminoles had not lost a weekend series all season and entered the series with a 32-2 home record. The Tiger victories in the final two games of the series also meant Florida State lost back-to-back games for the first time in 2007, and it was the first time since 1993 that Clemson won a series in Tallahassee. Clemson also did so without the services of its leading hitter in Brad Chalk, who did not make the trip due to a back injury, and started five freshmen in the lineup in its two wins.

In game-one on May 11, Tony Thomas, Jr. reached base in all five plate appearances to lead Florida State to an 11-1 win over Clemson. Thomas was 3-for-3 with two doubles, a walk, hit-by-pitch, and two steals, as the Seminoles totaled 15 hits and were 9-for-13 with runners in scoring position. A six-run seventh-inning blew the game open for the Seminoles, who clinched the ACC Atlantic Division title with the victory. Starter Bryan Henry allowed eight hits, one run, and no walks with eight strikeouts to improve to 13-0 on the season. D’Alessio’s solo homer in the fourth inning scored Clemson’s lone run. The Tigers totaled 10 hits, but they were just 2-for-18 with runners on base.

In game-two on May 12, Clemson scored three runs in the ninth inning to top Florida State 7-6. Harbin tied the score in the ninth with a two-run double down the left-field line, then Hogan beat out a potential double play to allow D’Alessio to score the go-ahead run. The Seminoles took a 6-1 lead in the third inning, but they did not score the rest of the way. Alan Farina pitched 4.1 scoreless innings of relief, allowing just four hits and no walks with six strikeouts to record the win. It was the first time all season the Seminoles lost when leading at any time after the third inning.

In game-three on May 13, D’Alessio went 3-for-5 with two homers and five RBIs to lead Clemson to an 11-6 win over Florida State. D’Alessio gave the Tigers an early lead on a three-run homer in the first inning. After the Tigers scored four runs in the sixth inning, D’Alessio blasted a two-run homer in the seventh inning to give Clemson a 10-2 lead. Florida State rallied with four runs in the seventh, but Stephen Clyne shut the door to record the save. Mitchell pitched 6.0 effective innings in his first career weekend start to earn the win on his 20th birthday. Clemson outhit the Seminoles 12-7 and totaled eight extra-base hits, including a two-run homer by Harbin.

During the week, the Tigers hit .309 with a .407 on-base percentage, 26 walks, and 34 runs in five games. Clemson also had a .979 fielding percentage, committing just four errors.

The pitching staff had a 5.32 ERA and .318 opponents’ batting average during the week. The staff also totaled 46 strikeouts against 24 walks.

Farina continued to pitch well out of the bullpen. He pitched 5.2 scoreless innings with eight strikeouts in two relief appearances, including his outstanding outing to earn the win at #2 Florida State on Saturday. It was a memorable day for the Florida native, as both his parents graduated from Florida State. He also grew up a Seminole fan and attended Mike Martin’s Camp five times as a youth.

Farina is 4-2 with a 3.45 ERA and 58 strikeouts in 47.0 innings pitched this year. His numbers on the road this season have been remarkable. In 21.1 innings pitched in seven relief appearances on the road, he has a 3-1 record, 0.42 ERA, and .113 opponents’ batting average. He has allowed just eight hits (all singles), one run, and three walks with 31 strikeouts as well.

The Tigers will play host to College of Charleston on Tuesday night in their final regular-season home game before traveling to Raleigh, NC to take on N.C. State in a three-game series beginning Thursday night.