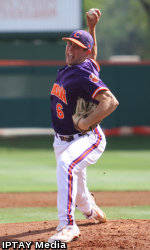 Series Promotions All current members of the Tiger Letterwinner’s Association are invited to attend the College of Charleston series from May 5-7. Each member will receive free admission by presenting their current membership card at the ticket gate next to the left-field foul pole. Additional tickets for family members can be purchased on gameday for all three games for $6.

Clemson is also hosting Little League and Clemson Baseball Camper Nights for the entire College of Charleston series. Any Little Leaguer who wears their team baseball jersey or their team hat will receive a free general admission ticket, as well as any camper who wears their Clemson Baseball t-shirt. Tickets can be redeemed at the ticket booths at either the left-field entrance or the entrance behind home plate beginning 90 minutes before the scheduled first pitch.

The Starting Pitchers In game-one, College of Charleston will start junior righthander Christian Powell (8-2, 2.37 ERA) on the mound. The Greenwood, SC native has made 11 starts and one relief appearance for a total of 68.1 innings pitched. He has allowed 58 hits (.230 opponents’ batting average) and 17 walks with 56 strikeouts.

The Tigers will counter with junior righty Dominic Leone (6-3, 5.53 ERA) on Saturday. The Norwich, CT native has made 11 starts for a total of 57.0 innings pitched. He has surrendered 62 hits (.291 opponents’ batting average) and 28 walks with 44 strikeouts.

In game-two, the Cougars will send out senior lefty Josh Renfro (6-4, 3.68 ERA) on the mound. The Bradenton, FL native has made 11 starts and one relief appearance for a total of 63.2 innings pitched. He has given up 64 hits (.258 opponents’ batting average) and 10 walks with 58 strikeouts.

Clemson will counter with sophomore righty Kevin Pohle (4-2, 3.31 ERA) on Sunday. The Saint Louis, MO native has made nine starts and two relief appearances for a total of 51.2 innings pitched. He has given up 53 hits (.275 opponents’ batting average) and 23 walks with 29 strikeouts.

In game-three, College of Charleston will start junior righthander Matt Pegler (7-2, 2.83 ERA) on the mound. The Greenville, SC native has made 11 starts for a total of 63.2 innings pitched. He has yielded 54 hits (.228 opponents’ batting average) and 16 walks with 46 strikeouts.

Clemson’s starting pitcher for game-three on Monday has yet to be determined.

The Cougars College of Charleston, led by fourth-year Head Coach Monte Lee, enters the series at Clemson with a 31-13 overall record and 19-8 SoCon mark after winning two of three games at Western Carolina last weekend. The Cougars, who have won 10 of their last 12 games, are 13-7 on the road and 5-2 in one-run games in 2012.

The pitching staff has a 2.83 ERA and .227 opponents’ batting average along with 354 strikeouts against 112 walks in 391.0 innings pitched. Senior righthander David Peterson has 10 of the team’s 12 saves along with a 2.73 ERA and .193 opponents’ batting average in 29.2 innings pitched over 25 relief appearances. College of Charleston, who has allowed 42 steals in 52 attempts, is fielding at a .965 clip as well.

The Tigers Clemson enters the series against College of Charleston with a 26-19 overall record and 14-10 ACC mark after winning two of three games at Georgia Tech last weekend. The Tigers, who are coming off final exams this past week, are 15-12 at home in 2012.

The pitching staff has a 3.82 ERA and .268 opponents’ batting average in 412.0 innings pitched. The staff has allowed 170 walks against 344 strikeouts, good for a 2.02 strikeout-to-walk ratio. Sophomore righty Mike Kent has two saves and a team-best 2.20 ERA in 32.2 innings pitched over 15 relief appearances. The Tigers are fielding at a .972 clip as well.

Brady, Campbell Suffer Injuries Righthanders Kevin Brady and Matt Campbell both suffered injuries in the Tigers’ 6-5 loss in 13 innings at Georgia Tech on April 27. Brady, a junior who was Clemson’s Friday starter each of the first 11 weeks of the season, suffered a hamstring strain while covering first base in the sixth inning. Campbell, a sophomore who was one of the team’s top relievers in 2012, suffered a Latissimus Dorsi (“Lat”) strain in the ninth inning. Brady will be out of action until at least mid-May, while Campbell will be out of action indefinitely.

Kieboom Named to ACC Player-of-the-Week Junior catcher Spencer Kieboom (Marietta, GA) was named ACC Player-of-the-Week on April 30 for his performances in four games from April 24-29. He went 11-for-20 (.550) with a homer, double, eight RBIs, and five runs. Playing near his hometown against Georgia Tech from April 27-29, he went 10-for-15 (.667) with a grand slam, double, seven RBIs, and four runs to lead Clemson to a series win. He totaled at least two hits in all three games and raised his batting average 47 points (.230 to .277) in the series.

Kieboom was also named to the Johnny Bench Award Watch List in March. It was the second year in a row he was named to the list. The award goes the nation’s best catcher.