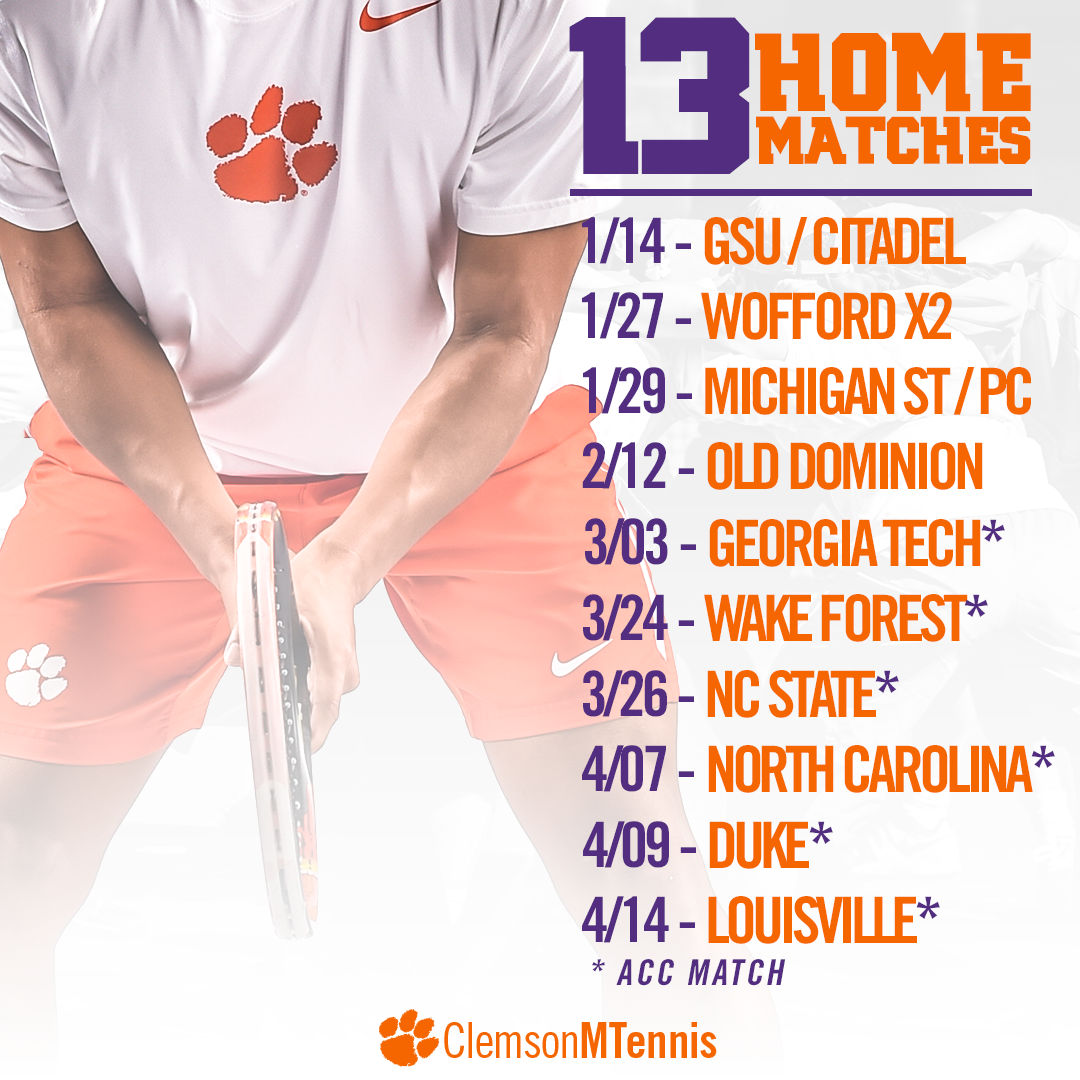 CLEMSON, S.C. – Seven teams that were in the field for the 2016 NCAA Tournament highlight Clemson’s 2016-17 men’s tennis schedule, released Friday by first-year Head Coach John Boetsch. The spring schedule features 13 home matches and 12 on the road or at neutral sites, including four doubleheaders.

The spring season begins Jan. 14 with a doubleheader against Georgia Southern and the Citadel in Clemson. The Tigers then travel to Davidson, N.C. to face Winthrop and Davidson in a doubleheader. That is followed by two more doubleheader contests, including an early highlight of the schedule on Jan. 29, when the Tigers hosts Michigan State.

The team returns to the road on Feb. 5 to play The Crimson Tide in Tuscaloosa, Ala. On Feb. 19 the Tigers open ACC play on the road at Miami. Once March begins Clemson’s schedule transitions into the toughest portion which includes the ACC Champions, Wake Forest and the back to back NCAA Champions, Virginia.

On March 3 the Tigers host Georgia Tech for their first home match after three straight matches on the road. A week later on March 10 Clemson travels to in-state rival South Carolina. The first-year Assistant Coach Ryan Young is set to make his first return to South Carolina since joining the Tigers this offseason. After traveling to Florida State, the Tigers hosts the ACC Champions Wake Forest on March 24 at Hoke Sloan Tennis Center. The month of March ends with NC State and a trip to Blacksburg to face Virginia Tech.

From April 2-14, Clemson has three more home matches, all against ACC opponents, highlighted by North Carolina on April 7. The Tar Heels finished the season ranked third in the NCAA. The regular season concludes April 23 when the team visits Boston College in Massachusetts.

“We are excited about the Spring schedule. In our first year, Coach Young and I wanted to have opportunities early to gain momentum, and some challenges out of conference to get us ready for our ACC schedule,” said Head Coach John Boetsch.

The 2017 ACC Tournament will be held April 26-30. The tournament has been moved out of Cary, N.C. and is set to be played in Rome, Ga. at the Rome Tennis Center at Berry College. Clemson looks to return to the NCAA Tournament in 2017 for the third time in the last five years. Following first and second round matches at school sites, the NCAA Team & Individual Championships are in Athens, Ga., from May 18-29.