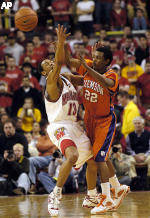 Clemson Advances In ACC Tournament With 84-72 Win Over Maryland

WASHINGTON (AP) – Maryland’s reign as Atlantic Coast Conference champion is over, courtesy of yet another whipping by unheralded Clemson.

Shawan Robinson made six 3-pointers and scored 24 points, leading the Tigers to an 84-72 victory Thursday in the opening round of the ACC tournament.

Clemson, which hadn’t won a game in the tournament since 2001, next faces second-ranked North Carolina on Friday. It marked the first time in school history that Clemson (16-14) beat Maryland (16-12) three times in the same season.

Maryland won the ACC tournament last year with an improbable run, beating the third, second and top-seeded teams. This time, however, the Terrapins couldn’t eradicate the inconsistency that plagued them throughout the regular season.

Chris McCray led the Terrapins with 24 points and Nik Caner-Medley had 14 on 5-for-17 shooting. John Gilchrist, a star in the ACC tournament last year, missed six of seven shots and scored just four points. He played only two minutes in the second half because of a sore ankle.

Clemson led 55-50 before reserve Olu Babalola made a three-point play and a 3-pointer to expand the margin to 11, and the Terrapins never got closer than nine points.

Robinson was marvelous from long range, going 6-for-8 beyond the arc. His proficiency from the outside made up for a quiet performance by center Sharrod Ford.

Ford had 24 points, 10 rebounds and nine blocks in the last game between the teams, a 97-93 Clemson victory at Maryland on Feb. 22. This time, Ford finished with six points and eight rebounds after a scoreless first half in which he grabbed only two rebounds.

Maryland played without reserve freshman forward James Gist, who sprained a knee in practice earlier in the week. He suited up, but did not participate in warmups and watched the entire game from the end of the bench.

Gist started two games this season and was averaging 6.3 points, 3.9 rebounds and 17 minutes a game.

Robinson went 4-for-5 from beyond the arc and scored 14 points to stake the slow-starting Tigers to a 39-36 halftime lead.

Clemson committed turnovers on each of its first six possessions and failed to get off a shot over the opening 2{ minutes. Led by McCray, who made three 3-pointers and scored 12 points before four minutes had elapsed, Maryland led 8-0 and 16-6.

At that point, the partisan crowd cheered wildly for the host team. But the joy wouldn’t last.

After the Tigers used an 11-0 run to take the lead, the Terrapins answered with a 9-0 spurt. It was 31-24 before Robinson scored eight straight points to put Clemson back in front.