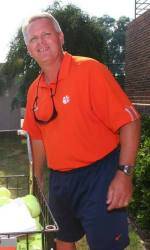 CLEMSON, SC – Chuck McCuen, who has served as an assistant men’s tennis coach at Clemson for the past six seasons, has been named Head Men’s Tennis Coach as announced by Associate Director of Athletics Phil Grayson Monday.

McCuen replaces Chuck Kriese who retired in May, after 33 years as the Head Coach of the Tiger tennis program. He becomes only the seventh head tennis coach since the program began at Clemson in 1910.

“I am very passionate about helping our young men at Clemson become the very best people, students and athletes that they can be,” said McCuen. “I am grateful that the Clemson Tennis Program has given me the venue that I can accomplish this goal.

I am also grateful to President Jim Barker, Athletic Director, Dr. Terry Don Phillips and Associate Director of Athletics, Phil Grayson for instilling in me this responsibility of continuing the great tennis heritage that has already been established at Clemson. I am looking forward to working with the Clemson family. I am thankful to Coach Chuck Kriese for his mentorship for the last six years.

McCuen, 47, had been the Tennis Director at Georgia State for 19 years (1983-2002) prior to coming to Clemson. McCuen was named conference coach of the year five times and propelled Georgia State into a top 70 nationally ranked tennis program.

McCuen had a positive impact on the Clemson program in his first season at Clemson in 2003 when he helped coach the Tigers to 25 wins, including a 6-2 record in the ACC. It was Clemson’s highest win total since 1989. The success continued in 2004 when Clemson advanced to the Final Eight of the NCAA Tournament and posted a record of 26-12. The Tigers also finished the 2005 campaign with a 25-11record overall. In 2006 Clemson was 23-10 and in 2007, the Tigers had a 31-10 mark, the most wins since 1986. Clemson won at least 23 matches five consecutive years (2003-07) for the first time since the 1979-86 era. The streak coincides with McCuen’s arrival at Clemson. This past season, the Tigers after losing three starters all at the top of the lineup finished with a 15-20 record. Clemson has an overall record of 145-88 since McCuen joined the Tiger program in 2003.

McCuen coached the Panthers to five conference titles and took them to the NCAA Tournament three times in a four-year period (1999, 2000, and 2002). While at Georgia State, three Panthers were named Conference Players-of-the-Year. He also coached 14 all-conference players. While at Georgia State he compiled a 261-162 record in 19 years and produced winning seasons in nine of 10 years in one stretch, including six consecutive winning seasons. In 1996-97, Georgia State was ranked for the first time ever in the ITA National Rankings.

He became an NAIA All-American at Flagler College in St. Augustine, FL and went on to earn double degrees in recreation management and history in 1983.

While at Georgia State, he was active in the community contributing his time to Atlanta’s youth tennis programs as a tennis instructor. He has been married to Dr. Linda McCuen, a professor at Anderson University, for 26 years. The couple has one daughter, Lauren, who is a middle school special education teacher in Charleston, SC.

He has been married to Dr. Linda McCuen, a professor at Anderson University, for 26 years.