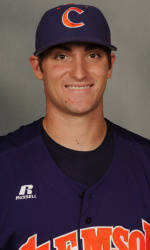 Mike Freeman’s two-run homer in the first gave Clemson the lead, but the Yellow Jackets scored five runs in the second to take a three-run lead. The Tigers rallied with four runs in the fifth, capped by Jeff Schaus’ three-run homer. Georgia Tech tied the score with a run in the sixth inning, and neither team scored again until Burnette lined a walkoff home run in the 10th inning.

Casey Harman pitched a career-high 7.2 innings. He gave up 10 hits, six runs, and one walk with nine strikeouts.

The Tigers wasted little time taking the game’s first lead in the first inning. Mike Freeman’s followed with a two-run homer to right-center, his fourth long ball of the season.

In the second inning, Cole Leonida led off with an opposite-field, solo home run to right-center, his eighth homer of the year. Matt Skole hit the next pitch deep over the fence in right field for a solo homer, his 12th long ball of the season. Burnette followed with a single up the middle. Two batters later, Jacob Esch hit a potential inning-ending double play grounder up the middle, but the Tigers misplayed the exchange and all runners were safe on the single. The play was crucial, as Georgia Tech scored three more runs in the frame. Brandon Thomas laced a triple to left field to score Burnette and Esch. Jeff Rowland followed with a groundout to third to plate Thomas.

In the sixth inning, Thomas Nichols hit a one-out single up the middle on a 1-2 pitch. Harman was the victim or more tough luck when Esch hit a routine flyball to deep center, but Epps could not pick up the ball in the evening sky and it fell for a double to move Nichols to third. Thomas’ sacrifice fly to center plated Nichols to tie the score 6-6.

In the top of the 10th inning, Lamb led off with a single up the middle and Epps followed with a bunt single. After Freeman popped up a bunt for out #1, the two runners moved up a base on a wild pitch and Schaus was intentionally walked. Kyle Parker struck out looking for out #2, then John Hinson lined an 0-2 pitch up the middle, but Derek Dietrich was positioned there and made the catch for the inning-ending out.

After the first two Yellow Jackets were retired in the bottom of the 10th inning, Skole walked before Burnette lined a two-run homer over the fence in right field.

Every Yellow Jacket starter had at least one hit, as the team totaled 12 hits in all. Leonida and Burnette both had two hits and a homer, while Thomas added a team-high three RBIs.

Schaus, Miller, Nester, and Lamb all had two hits apiece for Clemson, who had 10 hits in the contest. However, Hinson saw his 14-game hitting streak end with an 0-for-5 performance for the Tigers, who fell to 0-8 in their last eight games decided by two runs or less.

Clemson and Georgia Tech will play game-two of the series on Saturday at 1:00 PM. The contest will be televised live by Regional Sports Network.