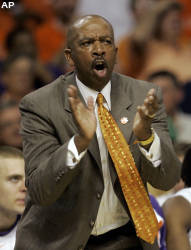 “Bryan is an emerging player and a welcome addition to our program,” Purnell said. “He is a Clemson-type athlete with high character. We look forward to his maturation as a student, basketball player, and as a person. We think he has a very bright future at Clemson.”

Narcisse, a 6’7″ forward, averaged 14 points, 10 rebounds, and four blocks per game as a senior while leading the Yellow Jackets to the quarterfinals of the AAAA state tournament. He was named All-State by the South Carolina Basketball Coaches Association and area Player-of-the-Year by the Augusta Chronicle. He played in the 2008 Carolinas All-Star Classic on April 5 at the Bobcats Arena.

A strong student as well, Narcisse will graduate with honors after compiling a 3.8 career GPA. He was inducted into North Augusta High School’s Hall of Fame for outstanding character and community involvement.

Three players signed with Clemson in the fall period. Catalin Baciu is a 7’2″ center out of Veritas Christian Academy in Fletcher, NC and consensus top-150 prospect by the major recruiting services. Andre Young is a 5’9″ guard out of Albany, GA who recently won the three-point shootout at the Capital Classic. Young is a four-star prospect by several services and is rated as high as the #78 player nationally by Prep Stars. Tanner Smith, a 6’5″ wing from Norcross, GA, also played in the Capital Classic and was an All-State selection after leading Wesleyan High School to its first-ever state championship.