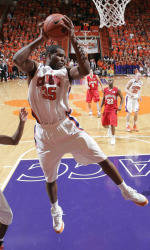 ATLANTA – Clemson forward Trevor Booker is among 30 midseason candidates for the 2009 Naismith Trophy, the Atlanta Tipoff Club announced Tuesday. Booker is one of nine ACC players named to the list for the award, which will be presented by AT&T to the National Player-of-the-Year at the Final Four in Detroit. He is the first player from Clemson to be named a midseason candidate for this award since Greg Buckner in 1998.

Booker is the leading scorer and rebounder for Clemson (22-4 overall, 8-4 in ACC), ranked #12 in the latest Associated Press poll. The 6-7 junior from Whitmire, SC is averaging 15.2 points and 9.2 rebounds per game. He ranks first in the ACC in blocks per game (2.2) and field goal percentage (.575), and is second in rebounds per game.

Booker has produced nine double-doubles this season, including five against ACC teams. He currently ranks fifth in Clemson history with 199 blocked shots, a figure that ranks second in ACC history among players 6’7″ or shorter. He also ranks in the top 10 in Clemson history in career rebounds (721) and career field goal percentage (.577).

The top 30 men’s list was voted on by the Atlanta Tipoff Club’s Board of Selectors, comprised of leading basketball journalists, coaches and administrators from around the country. The board based its criteria on player performances this season. The vote was tabulated and certified by the accounting firm of Habif, Arogeti & Wynne, LLP. HA&W is the largest independent accounting firm in Georgia and one of the top 50 firms in the United States. The Naismith Trophy presented by AT&T is the most prestigious national basketball award and is given annually to the men’s college basketball player of the year. This year, the award will be presented at the NCAA Men’s Final Four in Detroit.

This season marks the 40th anniversary of the first Naismith Trophy, which was presented to UCLA’s Lew Alcindor, who is known today as Kareem Abdul-Jabbar. At the time, the Atlanta Tipoff Club, founded during the 1956-57 basketball season, was looking to create a national identity for its brand and created the award to honor the best basketball player in the nation. Alcindor, along with UCLA head coach John Wooden, flew to Atlanta in the spring of 1969 to receive the trophy.

“Looking at the college basketball landscape, it’s understandable that so many of the top players nationwide are contenders for the Naismith Trophy,” said Gary Stokan, president, Atlanta Tipoff Club. “The final month of the season will be telling, and that is what makes college basketball so exciting.”

For the sixth consecutive season, presenting sponsor AT&T will once again set the standard in allowing fans to participate in determining this year’s winner. Through the power and ease of text messaging, fan voting will account for an unprecedented 25 percent of the final results – more than any other national college basketball award. This year, beginning March 22, AT&T wireless customers – and sports fans on other wireless networks – will be able to text their votes for the player of their choice.

“The Naismith Trophy is unique among college awards in that it gives the fans a real voice in selecting the top player in the country,” said Tim McGhee, executive director, AT&T corporate Sponsorships. “AT&T is proud to sponsor the Naismith and to empower fans to make sure their voices are heard”

CBS Sports’ “AT&T at the Half” features a weekly Naismith Trophy Watch, highlighting the men’s players in contention for the coveted award who have distinguished themselves throughout the season. On March 22, CBS will announce the four Naismith Trophy finalists during its first-round coverage of the NCAA Men’s Basketball Tournament. For more information, visit www.naismithawards.com.