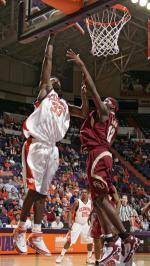 Clemson will be seeking its fourth consecutive victory overFlorida State. The Tigers also have an active winning streak ofthree in a row over Maryland. Clemson has not defeated an ACC teamfour consecutive meetings since a six-game winning streak over NCState from 1992-93 thru 1994-95. Clemson will be attempting to winconsecutive ACC road games for the first time since Jan. 11-15 of1997. That year Clemson won at Florida State and Maryland inconsecutive ACC road games. Clemson won at Georgia Tech in its lastACC road game on January 21. Clemson won at Florida State last year56-54. A Clemson victory at Florida State on Wednesday would giveClemson road wins in consecutive years at the same ACC venue forthe first time since 1996- 97 and 1997-98 at Florida State. Clemsonand Florida State are both coming off home overtime losses to ACCfoes. Clemson senior Shawan Robinson went over the 1000-point markin the double overtime loss to NC State. He scored a season high 22points in the game and made 10-10 from the foul line, the highestperfect game on the line for a Clemson player since 1997. Robinsonleads the ACC in free throw shooting entering this week’s play witha .927 figure. He is the individual leader in free throw shooting,yet Clemson is last in the ACC as a team. Robinson has moved intoseventh place in Clemson history in career free throw shooting.Vernon Hamilton continues to lead the ACC in steals with 53 in 20games for 2.65 per game. Hamilton is on pace to break ChrisWhitney’s season per game record of 2.43 set in 1992-93. Hamiltonalso leads Clemson in scoring and assists. Clemson and FloridaState force the most turnovers in the ACC. The Seminoles lead thelegaue in forcing miscues with 19.8 per game, while Clemson issecond at 19.1 per game. Clemson leads the conference in steals andranks in the top five in the nation with 11.05 per game. FloridaState is third in the ACC at 9.47 steals per game. Clemson hasforced 74 more steals than it has committed, including a +24 marginin its last two games. While Clemson did close the month of Januarywith a double overtime loss to NC State, Clemson did have threewins in the month, the most wins for the Clemson basketball team inthe month of January since January of 1997. Clemson is just twowins short of equalling its victory total (16) during the entire2004-05 season. This is the first time since 1996-97 that Clemsonhas won at least 14 of its first 20 games.