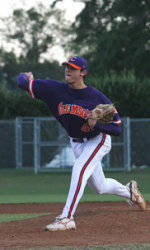 Clemson vs. Western Carolina Clemson (18-13) will travel to Cullowhee, NC to play at Western Carolina (21-11) Tuesday at Hennon Stadium. First pitch is scheduled for 7:00 PM. The game will be broadcast live on the radio by WCCP (104.9 FM) out of Clemson. Live stats will be available online at ClemsonTigers.com as well.

The Series Clemson and Western Carolina have met 54 times on the diamond, with the Tigers holding a 45-9 lead in the series that dates back to 1974. The two teams last played in 2004, an 8-7 come-from-behind Tiger victory. Clemson scored three runs in the ninth inning and was aided by a throwing error by pitcher Daniel Lindner in the final frame. Two years ago, the two teams split a home-and-home series, including a 9-5 Catamount win in Cullowhee. Prior to the Catamounts’ win in 2003, Clemson had won seven in a row in the series. The two teams have played at least one game every year since 1978.

The Starting Pitchers Western Carolina will start junior righthander Bryan Tupper (0-1, 8.00 ERA) on the mound Tuesday. The Seattle, WA native was a 2003 teammate of Tiger outfielder Travis Storrer at Edmonds (WA) Community College. In seven starts and two relief appearances (27.0 innings pitched) during his first season at Western Carolina, he has allowed 42 hits and 11 walks while striking out 19.

The Tigers will counter with freshman righty David Kopp (2-3, 4.40) on Tuesday. The Margate, FL native has made three starts and seven relief appearances for a total of 30.2 innings pitched. He has allowed 28 hits and nine walks while striking out 21. He has been more effective away from home than at home, as he has a 3.32 ERA and .191 opponents’ batting average in 19.0 innings pitched away from home.

The Catamounts Western Carolina, led by sixth-year Head Coach Todd Raleigh, enters Tuesday’s game with a 21-11 overall record and 9-6 mark in the Southern Conference. Raleigh, who was a player at Western Carolina under Tiger Head Coach Jack Leggett, led the Catamounts to an 8-5 win at top-ranked Georgia Tech on March 29. They have also played #7 Rice (twice), #18 College of Charleston (three times), and #23 Coastal Carolina (once). This past weekend, Western Carolina beat East Tennessee State twice in three games at Hennon Stadium.

The Catamounts are hitting .310 overall and are led by freshman Jonathan Greene, who is hitting .413 with five homers and 28 RBIs in 24 games. Another freshman, Steven Strausbaugh, leads the club with seven homers and 30 RBIs. Two powerful transfers from South Carolina are also hitting above .300, as Jared Greenwood (.321) and Trey McDaniel (.311) both have driven in 22 runs. Western Carolina is fielding at a .961 clip as well.

Western Carolina has a 5.44 ERA and .307 opponents’ batting average. The staff has struck out 210 against 91 walks in 281.1 innings pitched, good for a 2.9 walks per nine innings pitched mark. The team has totaled 11 saves, as Brian McCullen and Clint Ramsey are tied for the team lead with three apiece. Six different Catamounts in all have at least one save.

The Tigers Clemson enters Tuesday’s game against Western Carolina with an 18-13 overall record and 9-3 ACC mark after sweeping Duke in a three-game series over the weekend. The Tigers, whose last seven losses have been by a combined 10 runs, are 6-8 on opponents’ home fields in 2005.

The Tigers upped their season batting average to .296 thanks to hitting .349 in the Duke series. The team also is hitting .320 with runners in scoring position thanks to going 21-for-34 (.618) against the Blue Devils. The team’s hottest hitter is freshman centerfielder Brad Chalk, who is 18-for-35 (.514) in his last 12 games. He has raised his season average to .368 and has a .442 on-base percentage. The other two Tiger freshmen “up the middle” are also doing well at the plate, as Taylor Harbin (2B) is hitting .373 and Stan Widmann (SS) is hitting .300.

The pitching staff has a 3.46 ERA and .259 opponents’ batting average. The staff also has a 8.37 strikeouts per nine innings pitched mark, the best figure since the 1996 staff (9.69) that had the likes of Kris Benson, Billy Koch, and Ken Vining. Clemson has not allowed a home run in 11 straight games and has yielded an ACC-low nine long balls in 2005.

Harbin’s Fielding % Among Clemson Best In addition to his contributions as a hitter (team leader in batting average, slugging percentage, runs scored, hits, and doubles), freshman second-baseman Taylor Harbin has been a big reason Clemson has a .973 team fielding percentage. That is above the Clemson single-season record pace of .971 set by the College World Series team of 2002. Through 31 games, Harbin has a .986 fielding percentage, a figure that would be second best in Clemson history among Tiger third basemen, shortstops, or second basemen. Harbin has just two errors all year, one at Maryland while serving as the shortstop, and one in the Duke series as a second baseman.

Harbin has 92 assists and 44 putouts to go with the two errors for 138 total chances. The Clemson record for single-season fielding percentage by a Tiger non-first-baseman infielder is .988 by Billy Wingo in 1977. That year, Wingo had just three errors in 255 chances as the starting second baseman on a Clemson team that advanced to the College World Series and won 42 of 52 games.

The second-best fielding percentage by an infielder over the course of a complete season is the .9851 figure by Jeff Morris in 1993. That year, Morris had just four errors at second base in 270 chances. Morris will be on hand Wednesday night to throw out the first pitch prior to the Clemson-South Carolina game. Now working for Michelin Corporation in Oregon, he is best known for hitting a grand slam in the bottom of the eighth inning of the championship game of the 1993 ACC Tournament against N.C. State.

The third-best fielding percentage by a Clemson infielder for the course of a season is a .9846 mark by Rusty Adkins in 1967. Adkins is best known for his 41-game hitting streak from 1965-66, a record that is still an ACC standard today. But he obviously was an outstanding fielder in addition to his .379 career batting average that is the career record for the wooden-bat era, a record that obviously will never be broken unless the NCAA goes back to the use of wooden bats.

Greene and Baker both started on opening day for their respective teams against each other. Baker actually hit a home run in his second Major League at-bat, and finished the game with a pair of hits and two RBIs. Greene had two hits and two RBIs in the second game of the series between San Diego and Colorado on April 6.

That same day, LeCroy hit a three-run homer in the fourth inning to help the Twins to victory. The native of Belton, SC is in his sixth year in the Major Leagues. He entered this season with 41 career home runs, including a career-high 17 in 2003. Tim Teufel has the record for most home runs in the Major Leagues by a former Clemson player. He belted 86 home runs between 1983-93.

Benson started the season on the disabled list with the New York Mets. Benson was 12-12 last year with the Pittsburgh Pirates and the Mets. He has a career record of 47-53 in his five Major League seasons. Two Tigers who were on Major League rosters last year, Billy Koch and Billy McMillon, were not on opening-day rosters in 2005. McMillon is in the minor leagues with the Boston Red Sox organization. He is a veteran of six Major League seasons, including 2004 when he played in 52 games for the Oakland Athletics.

When Baker started the season in Colorado, he became the 38th former Tiger baseball player to appear in a Major League game. Clemson had five former players in the Major Leagues during the 2004 season, and 31 others played at some level of minor league baseball.

Tigers Sweep Blue Devils Thanks to Big Innings Clemson outscored Duke 36-15 in a three-game sweep at Kris Harvey was 5-for-19 with eight runs scored, a double, two homers, and four RBIs in the series. Ten other Tigers had at least two RBIs in the series thanks to the team going an incredible 21-for-34 (.618) with runners in scoring position. Duke stranded 28 runners on base in the series to Clemson’s 11. Tiger pitchers struck out 31 batters as well in the series.

In game one, Clemson scored eight runs in the sixth inning to defeat Duke 9-3 on April 8. The Tigers had eight of their hits in the sixth inning as well. Ben Hall and David Williams both had key hits off the bench in the sixth inning. The Tigers had 11 baserunners in the game, and nine of them scored. Clemson left just one runner on base. Harvey hit a solo homer in the fifth inning. Herman Demmink and Harvey each had two hits as well. Harvey struck out a career-high nine batters in 7.0 innings pitched to earn the win. He allowed five hits, two earned runs, and one walk. Harvey and Daniel Moskos combined to strike out 13 in the game.

In game two, Clemson overcame another early deficit to down the Blue Devils 11-6 on April 9. Brad Chalk each had two doubles, while Casanova scored a game-high three runs. Taylor Harbin hit a two-run homer and a run-scoring single as well. Jorge Andrade added his first career homer, an opposite-field two-run shot in the eighth inning. Four of Clemson’s first six runs were scored by players who had walked a day after Duke did not walk any batters. Robert Rohrbaugh earned the win in 6.2 innings pitched.

In game three, the Tigers scored 12 runs in the eighth inning to sweep the Blue Devils 16-6 on April 10. The 12-run eighth inning was the most ever in an eighth inning in school history. The 12-run inning also tied for the sixth-most runs in a single inning in Clemson history. The Tigers had only scored 10 runs in the eighth inning through the first 30 games of the season. Duke took a 6-4 lead in the top of the eighth, but 12 runs on 11 hits blew the game open. The eighth was the first time during the game that Clemson had its leadoff batter reach base. Chalk, Harbin, and Stan Widmann each hit solo homers, as Widmann’s first career long ball tied the score 4-4 in the seventh inning. The Tigers, who were 11-for-16 with runners in scoring position, totaled 17 hits in all, including a 3-for-4 performance by Harvey. Harvey also scored five runs and had three RBIs. Reliever Stephen Clyne earned his first career win, while Duke left 15 runners on base to Clemson’s five.