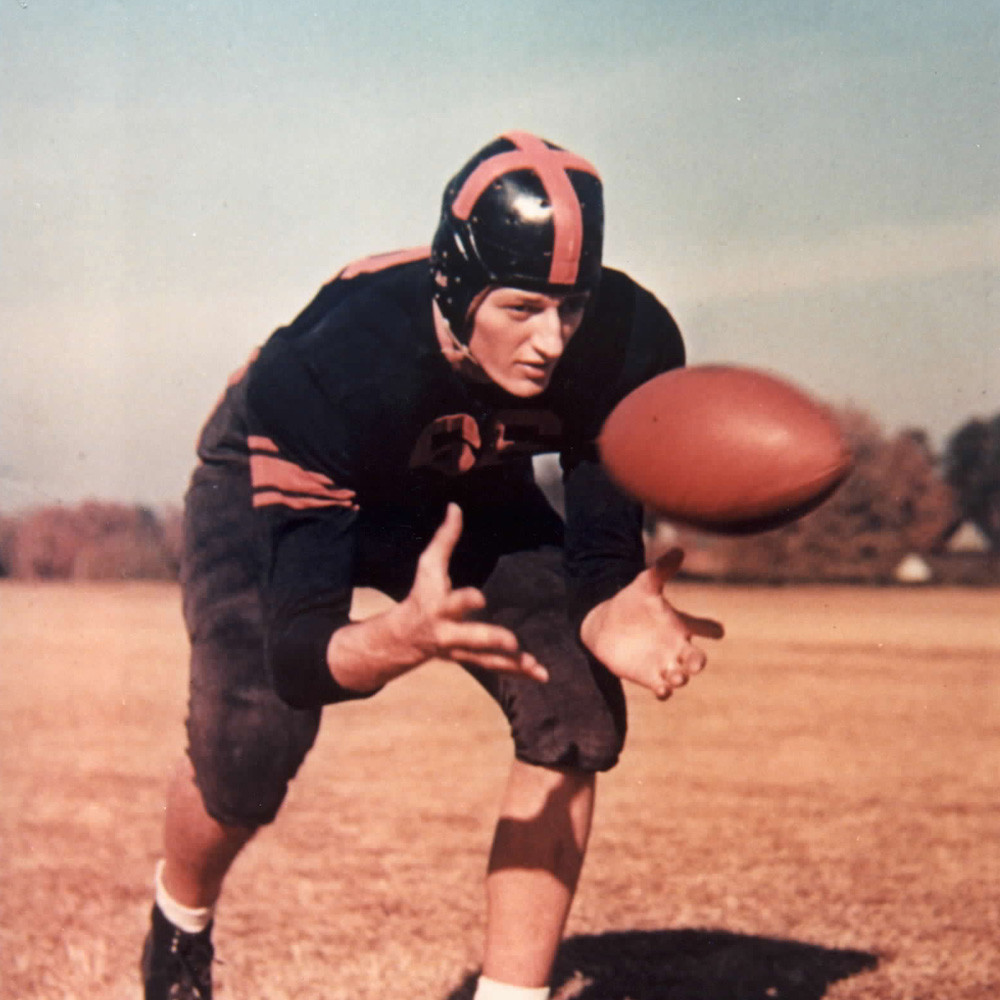 To this day, McFadden is regarded as Clemson’s greatest all-around athlete in its sports history.

McFadden, also known as “Bonnie Banks” or “The Great,” was a standout at Clemson in football, basketball, and track, earning three letters in each sport from 1936-40.  He earned All-America honors in both basketball (1938-39) and football (1939) and was named the nation’s most versatile athlete in 1939.

In 1939, on the gridiron, McFadden was a triple-threat player, leading the Tigers to a 9-1 record and Clemson’s first-ever bowl bid.  With McFadden batting down four passes in the second half, and averaging 44 yards on 11 punts, the Tigers defeated a Frank Leahy-coached Boston College team, 6-3, in the 1940 Cotton Bowl in Dallas, TX.

“I had seen safety men play centerfield in a football game and cover a lot of defensive territory, but that was the only time I saw it done from a cornerback postion,” Howard once said. “McFadden put absolutely everything he had into that effort—ability, speed, heart, endurance, determination, and a sixth sense of where the ball was going.”

He played one year in the NFL with the Dodgers before returning to Clemson.

He proved to be an outstanding professional football player.  He played in 11 games in 1940 for Brooklyn.  He had the longest rush that year in the NFL with a 75-yard jaunt.  He was tied for second for most yards per attempt with a 4.8 yards per carry average. He was also fifth in the league for most rushing yards per game. Defensively he had two interceptions.

Why did he play only one year in pro football after an outstanding collegiate career and an oustanding rookie season in the pro ranks?

“They couldn’t have paid me enough to make me come back,” said McFadden in an interview in the 1960s.  “I was a country boy, too far from home,   The team treated me fine, the directors of the ball club and I got along just fine, but I like a small town.”

When he returned back to Clemson he started coaching under Howard.

After coaching Clemson’s defensive backs under second-year Head Coach Frank Howard in 1941, McFadden joined the Army Air Corps and spent four years in North Africa and Italy.  He was discharged as a Colonel.

McFadden came back to Clemson after his service and was again the secondary coach, this time for four seasons (1946-49), and then took over as head freshman football coach for five years before returning to coach defensive backs in 1955, a spot he held until Howard retired following the 1969 season.

In 1959, McFadden became the first Clemson football player inducted into the College Football Hall of Fame.

Besides his football coaching years, McFadden also put in a stint as varsity track coach, freshman basketball coach, and for 10 years, 1946-1956, he was Clemson’s head basketball coach.  From 1947 through 1952, Clemson improved its conference victory total each year, the first coach in the history of college basketball to make a conference victory improvement five consecutive years.  The streak was culminated with an 11-4 Southern Conference record in 1951-52.

After Howard resigned as head football coach in 1969, McFadden took over the university’s intramural department, which he directed for 15 years.

“I can remember the first time I saw him on the practice field,” Howard recalled.  “He looked like one of those whooping cranes.  I thought sure as the devil that Coach [Jess] Neely had made a mistake by giving this boy a scholarship.  But he proved me wrong.”

In 1994, he was inducted as a charter member of the Clemson Ring of Honor at Clemson Memorial Stadium.

Of all of the honors he received as an athlete, he said the 1939 football team MVP award was his highest honor.  “To me, when your teammates vote you something, then you feel pretty good.  That award meant more than anything else to me.”

McFadden is the only Clemson athlete to have both his football jersey and basketball jersey numbers retired.  In 1995, the Banks McFadden Building adjacent to the Jervey Athletic Center was dedicated in his honor.

Away from athletics, he was a true champion.  His modest demeanor, his positive outlook, and gentlemanly personality were all trademarks of Banks McFadden. Another was his love for Clemson.

Why didn’t McFadden play longer in the NFL?   Another reason is probably he wanted to get back home, his beloved Clemson home.