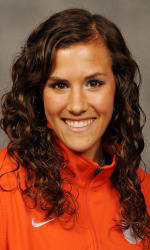 CLEMSON, SC – Alyssa Kulik was one of 10 student-athletes named to the 2012 Capital One Academic All-District IV Team for women’s track & field and cross country. The team was announced Thursday by CoSIDA, the College Sports Information Directors of America. This is the second straight season Kulik has been honored by CoSIDA. She was a second-team academic all-district choice in 2011. She is now eligible for the 2012 Capital One Academic All-America Team, which will be announced on Thursday, June 21.

On the track, Kulik was the ACC champion in the 3000-meter steeplechase and qualified in the event for next week’s NCAA Outdoor Championships. She was the fourth-place finisher a year ago and earlier this season ran a personal best and school record time of 9:52.90. Kulik, a member of all of Clemson’s ACC championship women’s teams the last three years, was also an All-ACC performer during indoor season in the mile.