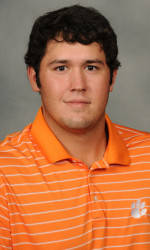 Mills shot a final round 65 on Sunday at the Furman Invitational to help lead the Tigers to their third consecutive win at the tournament. Mills had seven birdies, an eagle and two bogeys in the round, and the 65 tied for his best score as a Tiger, but his seven under par score was his career best versus par.

Mills finished in third place individually with his 208 score, his second best finish of the year. He will not compete again for the Tigers until the ACC Tournament April 20-22. He will miss the Augusta State Invitational and the Woodlands Invitational while he plays in the 2012 Masters.