Greensboro, N.C. – The Atlantic Coast Conference announced its league schedule Wednesday morning on Packer and Durham on ACC Network. Game times and network designations will be announced at a later date.

The home portion of Clemson’s ACC schedule includes contests against Notre Dame, Georgia Tech, Florida State, Syracuse, Virginia, Wake Forest, North Carolina, Virginia Tech, and Miami. The Tigers, picked 13th in preseason voting done by both the ACC Coaches and Blue Ribbon Panel, play six of their first eight conference games on the road, but close out the season with four of five inside Littlejohn Coliseum. For the 2020-21 season, ACC women’s basketball will play a 20-game schedule, a two-game increase from last year.

The 2021 ACC Women’s Basketball Tournament will be held March 3-7 at the Greensboro Coliseum for the 21st time in the last 22 years.

Clemson’s nonconference schedule includes just five games due to a later start to the 2020-21 season. The Tigers open the season on Wednesday, November 25 against Furman, then host Presbyterian on Friday, November 27. Clemson travels to Charlotte on November 30 for its only road nonconference game, before returning to Littlejohn Coliseum for games against Mercer (Dec. 2) and College of Charleston (Dec. 6).

Earlier this month, it was announced that Clemson will welcome fans into Littlejohn Coliseum. As part of the plan, the typical seating capacity of 8,758 will be reduced to 1,860 fans for both men’s and women’s basketball, based on six feet of social distance among seating pods. Fans will be seated primarily in pods of two and four affiliated guests. Admission will be free of charge. 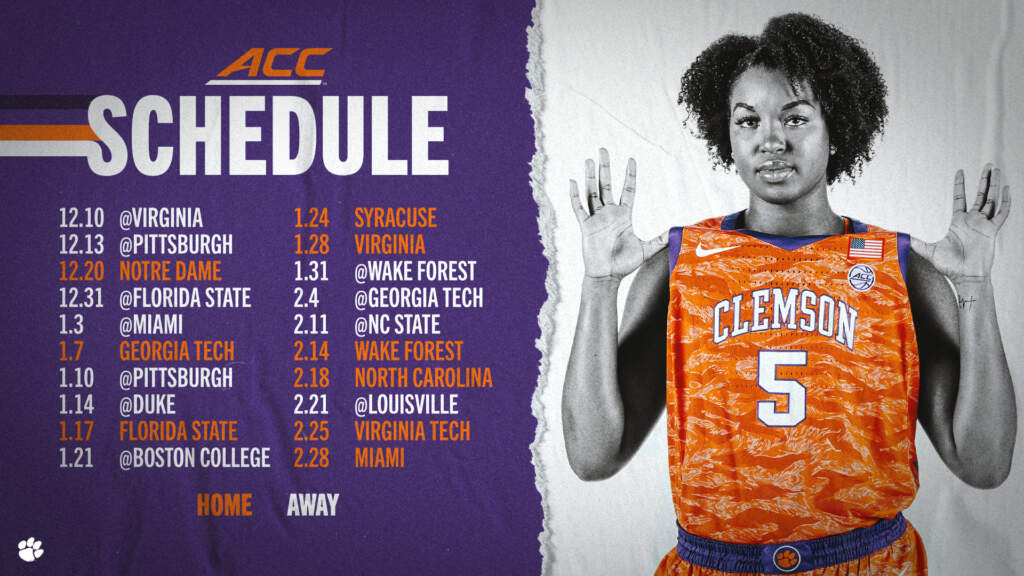