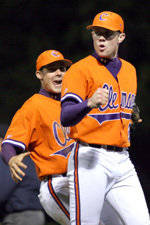 Ninth-Ranked Clemson recorded a season-high nine extra base hits on the way to a 10-1 win over Wofford in front of 2,944 fans at Doug Kingsmore Stadium Wednesday. The Tigers reached the 30-victory mark for the 32nd consecutive season with the win to improve to 30-13, while the Terriers dropped to 17-28. Clemson tallied four home runs and five doubles on the night.

Tyler Colvin was 3-for-5 with two doubles and three RBIs for Clemson. Travis Storrer, Marquez Smith, and Adrian Casanova each had two hits apiece for the Tigers. Chuck Eller had a double and scored the only run of the night for Wofford.

Stephen Faris (5-2) pitched 7.0 scoreless innings, allowing five hits and striking out seven to earn the win for Clemson. Ben Austin (0-3) surrendered seven runs on nine hits in 5.1 innings pitched and took the loss for the Terriers.

D.J. Mitchell walked to begin the first, and went to third on a single through the right side by Herman Demmink. Demmink stole second, and Storrer hit a sacrifice fly to right to score Mitchell. Colvin followed with a double down the right-field line that brought home Demmink.

Storrer doubled down the left-field line with one out in the third, and scored on a two-out double to left by Taylor Harbin.

Storrer added to Clemson’s lead with a solo home run to center with two outs in the fifth, his seventh long ball of the season.

Smith led off the sixth with a homer to left-center. Andy D’Alessio walked, and with one out Casanova hit an opposite field two-run home run down the right-field line, his fifth of the season. Mitchell reached on a bunt single and then stole second. Storrer walked, and moved to second on a wild pitch as Mitchell advanced to third. Colvin then lofted a single to left to score Mitchell and Storrer.

Smith led of an inning with a solo homer for the second time in the seventh, giving the junior his first career multi-home run game. It was his sixth homer of the season.

Eller doubled down the right-field line with two outs in the eighth, and then scored all the way from second on a passed ball.

Brad Chalk did not start for the first time in 81 games due to a sprained wrist.

Clemson returns to ACC action Friday night when it plays host to Virginia Tech at 7:15 PM at Doug Kingsmore Stadium.