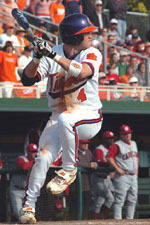 Heath Rollins hit a three-run homer in the fifth to give #23 Winthrop a lead it would never relinquish in a 6-3 win over #6 Clemson in front of 4,095 fans at Doug Kingsmore Stadium Tuesday. The Eagles won their eighth game against an ACC team to improve to 30-10, and the Tigers dropped to 27-11.

Phil Carey hit a solo home run to right with one out in the second to open the scoring, his fourth of the season.

Chalk beat out an infield single to lead off the fourth, and advanced to second on a fielding error by shortstop Matt Repec on a Tyler Colvin grounder. Andy D’Alessio laid down a sacrifice bunt to advance the runners, and Storrer followed with a two-run single to left that scored Chalk and Colvin.

Alan Robbins doubled to right-center to begin the fifth, and went to third on a fielding error by D’Alessio at first on a groundball by Chris Carrara. It was D’Alessio’s first error of the season. Rollins followed with a three-run home run down the right-field line, his second home run of the season.

Ben Elrich singled with one out in the sixth, and scored on Saum’s double to right-center on a perfectly executed hit and run play.

Harbin tripled to right to lead off the seventh, and scored on a sacrifice fly to center by Marquez Smith.

Phil Carey walked to lead off the eighth, and Tyler McBride came on as a pinch-runner. McBride moved to third on a single by Saum, and then scored on a sacrifice bunt by Robbins.

Daniel Moskos pitched 3.2 innings of relief for the Tigers, allowing one run on three hits.