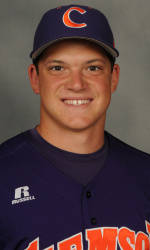 #22 Tigers Down Wake Forest 17-5 Saturday to Even Series

Kyle Parker and Brad Miller hit home runs in the first and second innings, respectively, to give the Tigers an early 3-0 lead. The Demon Deacons tied the score with three runs in the fourth inning, but Clemson erupted for 10 runs on seven hits in the fifth inning to put the game out of reach.

The Tigers took the game’s first lead in the first inning. John Hinson worked a two-out walk and Parker followed with a two-run homer to center, his 18th long ball of the season and sixth of his career against the Demon Deacons. It was also Parker’s 44th career home run, which moved him into sole possession of eighth place in the Tiger recordbook.

Miller led off the second inning with a long solo home run to right field, his fifth long ball of the year and second of the series.

In the fourth inning, Ryan Semeniuk led off with a double off the wall in left-center and moved to third on Steven Brooks’ groundout. Mike Murray then belted an opposite-field, two-run homer down the left-field line on a 3-0 pitch, his fourth long ball of the season. Two batters later, Mac Williamson lined a single to center, stole second, and scored on Carlos Lopez’s two-out double to left-center to tie the score 3-3.

Clemson came right back and regained the lead in the top of the fifth inning with 10 runs, the most by the Tigers in an inning in 2010. Leadoff batter Wilson Boyd lined the next pitch to center for a single to score Shaffer. Will Lamb loaded the bases with no outs on an infield single. Mike Freeman struck out for out #1, then Hinson hit a chopper on an 0-2 pitch in front of the plate and reached on a single to score Boyd. Pohl scored on a wild pitch and Parker walked to load the bases. Jeff Schaus then bounced a single up the middle on a 1-2 pitch to plate Lamb and Hinson. Parker scored on a passed ball as Schaus moved to second, then Schaus stole third. On ball-four to Miller, Schaus came home on a wild pitch and Shaffer reached on an infield single. After Boyd loaded the bases with a walk, Pohl lined a single to center to score Miller and Shaffer. Lamb followed with a single to left field to score Boyd, giving the Tigers a 13-3 lead. The 10-run frame tied for Clemson’s fifth-highest in the fifth inning in school history.

In the bottom of the fifth inning, Semeniuk drew a one-out walk and scored on Brooks’ double over the third-base bag.

Schaus hit a one-out triple to left field and scored when shortstop Pat Blair booted Miller’s routine grounder in the sixth inning. Shaffer followed with a double over the third-base bag to score Miller, upping the Tigers’ lead to 15-4.

In the top of the eighth inning, Schaus reached on a one-out walk and Addison Johnson ripped a liner to right field with two outs. Williamson slid feet-first but dropped the ball and Schaus scored on the play.

Matt Conway, who earlier extended his hitting streak to 13 games, led off the bottom of the eighth inning with a long solo homer to left field, his fourth home run of the year.

In the ninth inning, Lamb reached on an error to lead off the inning but was erased two batters later on Hinson’s fielder’s choice. Chris Epps laced a two-out single to right and Schaus singled to right field to score Hinson.

Clemson and Wake Forest will play the series-finale on Sunday at 1:00 PM.