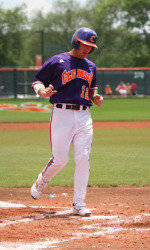 Jeff Schaus both hit two-run homers and four Tiger pitchers limited the Blue Hose to two runs in #22 Clemson’s 8-2 victory over Presbyterian at Doug Kingsmore Stadium on Tuesday night. The Tigers improved to 34-19, while the Blue Hose dropped to 13-38.

The Blue Hose tied the score 2-2 with a run in the top of the third inning, but Clemson scored six runs over its next six innings at the plate and four Tiger hurlers held the Blue Hose scoreless from the fourth inning on to assist Clemson to its 34th win of the season.

Will Lamb led off the first inning with a single through the left side to extend his hitting streak to 11 games. The Tigers loaded the bases with two outs but were unable to dent the scoreboard in the opening frame.

The Blue Hose took the game’s first lead in the top of the second inning. Nate Horton blooped a one-out single down the left-field line, advanced to second on a passed ball, and scored on Matt Hill’s double over the third-base bag.

Clemson responded with two runs in the bottom of the second inning to take the lead. Richie Shaffer led off with a walk. Two batters later, Stolz lined a two-run homer to left field, his first long ball of the season. Stolz was making his first career start at shortstop and his first overall start since April 18.

In the top of the third inning, Mack Hite hit a one-out double off the third-base bag. Two batters later, Kenny Bryant grounded a two-out single up the middle to plate Hite and tie the score 2-2.

In the bottom of the third inning, Kyle Parker led off with a double down the left-field line, moved to third on Schaus’ groundout, and scored on a wild pitch.

The Tigers doubled their lead in the fifth inning. Parker was hit-by-pitch with one out, advanced to second on Schaus’ groundout, and scored on Wilson Boyd’s two-out double to center after Aaron Preston slipped and was unable to come up with the ball on his diving attempt.

Clemson doubled its lead once again when Schaus blasted a two-run homer down the right-field line, his 13th long ball of the season, in the seventh inning. Parker, who reached on a two-out walk, also scored on the play.

In the eighth inning, John Nester led off with a walk and advanced to third on Stolz’s single up the middle as Stolz moved to second on the throw to third base. Two batters later, Mike Freeman walked on four pitches and Nester scored on a wild pitch on the play. After John Hinson walked to load the bases, Parker walked to bring home Stolz.

Hite, Horton, and Hill totaled two hits apiece to pace the Blue Hose, who had 11 hits. Hite and Hill had two doubles apiece as well.

Clemson will conclude the regular season with a three-game series against #7 Florida State at Doug Kingsmore Stadium starting Thursday at 7:00 PM. Thursday’s game will be televised live by CSS.