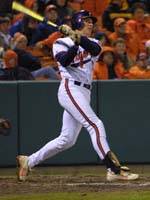 Senior lefthander Matt Lynch won his 37th career game as #2 Florida State evened up the series with a 7-2 victory over #13 Clemson Saturday in front of 4,125 fans at Dick Howser Stadium. Head Coach Mike Martin won his 1,271st career game, tying him with Ron Fraiser (Miami (FL)) for eighth place in NCAA history. Florida State improved to 32-6 overall, 10-4 in ACC competition, while the Tigers fell to 25-8 overall, 4-4 in the ACC. Clemson also fell to 4-1 in televised games this season.

Florida State started the scoring when Stephen Drew led off with a solo homer to right field in the first inning. Drew turned on a 2-2 fastball on the inner half for his fourth homer of the season and became the first Seminole to hit a leadoff homer in the first inning since 2000. Tony McQuade then reached on a fielder’s choice, stole second, advanced to third on a passed ball, and scored on Tony Richie’s single down the left-field line on a 3-0 count.

The Seminoles responded with a run of their own in the third inning. McQuade stole bases #2 and #3 on the evening and scored after catcher Brady Everett’s throw on the latter was muffed by McCann.

The turning point in the game came in the fifth inning when Clemson had a chance to tie the score but could not put a run on the scoreboard. With runners on second and third and one out, Zane Green and Russell Triplett both struck out looking on full counts pitches that were called on the corner by home plate umpire Scott Erby.

The ensuing half inning, Florida State made the Tigers pay with two runs. After intentionally walking Richie to load the bases with two outs, Jerrod Brown lined a two-run single to right field. Brown improved his career bases loaded mark to 18-for-23 with the hit.

Florida State came right back with two runs in the sixth inning on a homer by Blake Balkcom to left field, his second of the year.

The two teams will play the series finale Sunday at 1:00 PM. The game will be broadcast live by the Sunshine Network.