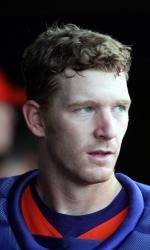 Senior lefthander Ryan Turner allowed just two runs in 5.2 innings pitched to lead #19 Georgia Tech to a 6-3 win over #17 Clemson on Sunday in front of 4,784 fans at Doug Kingsmore Stadium.

With the win, the Yellow Jackets salvaged the series after the Tigers won the first two games. Georgia Tech also improved to 27-17 overall and 14-9 in the ACC. The Tigers fell to 29-15 overall, 13-8 in ACC play. Sunday’s win snapped Clemson’s four-game winning streak in the series.

The Tigers, who outhit the Yellow Jackets 11-8, were led offensively by Doug Hogan, who went 3-for-3 with two walks. However, Clemson left 13 men on base, nine of which were in scoring position. The Tigers were also just 2-for-14 with runners in scoring position and 1-for-8 with two outs.

Tiger starter Ryan Hinson (4-2) suffered the loss, as he allowed four runs (one earned) on three hits while striking out two and walking six. Clemson used four pitchers in the game, while the Tiger defense committed two costly errors that led to four unearned runs.

The Yellow Jackets opened the scoring with a run in the first. House drew a walk, and with one out, Matt Wieters also walked. Crancer laced a single through the left side to load the bases. Luke Murton then walked to bring in a run and put Georgia Tech on the board 1-0. Hinson escaped further damage by striking out Tony Plagman and inducing a groundout by Curtis Dupart.

Georgia Tech added three unearned runs in the fourth. Plagman was hit by a pitch to lead off the frame. Dupart reached on an error by Andy D’Alessio that scored Plagman. Long then hit a sacrifice fly to score Dupart. With two outs, House doubled to left field, and both Michael Fisher and Wieters drew walks to load the bases. Crancer was then hit by a pitch to score House and put the Yellow Jackets up 4-0.

The Tigers broke through with two runs in the bottom of the sixth. D’Alessio and Marquez Smith were each hit by a pitch to lead off the inning. Hogan then singled through the left side to load the bases. With one out, pinch-hitter Ben Paulsen hit into a fielder’s choice that scored D’Alessio and erased Hogan. Pinch-hitter Alex Lee walked to load the bases. D.J. Mitchell then walked again to bring in a run.

The Yellow Jackets tacked on one more run in the eighth. With one out, Fisher singled down the right-field line. Wieters was intentionally walked and Crancer singled to right-center to load the bases. Fisher then scored on a wild pitch to put Georgia Tech up 6-2. Murton drew a walk to load the bases. But Plagman grounded into a double play to end the inning.

In the bottom of the eighth, David Bunnell drove in Hogan, who singled to lead off the inning.

The Tigers threatened again in the bottom of the ninth. Wilson Boyd and Taylor Harbin led off with back-to-back singles. Boyd and Harbin each advanced a base on a wild pitch. With two outs, Hogan walked to load the bases, putting the potential tying run on first base. But Alex Burg grounded out to end the game.

Clemson will take the next five days off for final exams before playing host to Boston College in a three-game series beginning Saturday at 7:15 PM.