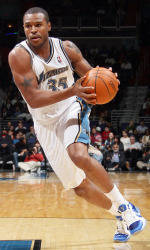 CLEMSON, SC – With several former Tiger basketball standouts excelling professionally, ClemsonTigers.com has taken the time to provide an in-depth look at where some of the players are competing for the 2011-12 season.

Click the PDF link above to read more about the scoring and rebounding averages of all 14 players, how many games each player has played this season, and where they rank among their league’s statistical leaders.

Below is a look “by the numbers” at Clemson’s 14 former players who are competing professionally, both domestically and overseas.

4 – Former Tiger Demontez Stitt (2007-11) has led his team to the Final Four of the Israeli Super League, and is their second-leading scorer

22.1 – Highest scoring average among former Clemson players, which belongs to Will Solomon (1998-2001), playing in the Ukraine

31 – Starts at forward this season by Trevor Booker (2006-10) for the NBA’s Washington Wizards; he leads the Wizards with a .533 field goal percentage