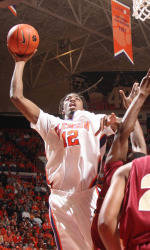 Quick Facts  A victory over Boston College will give Clemson 20 wins for the third year in a row. It would mark the first time in school history Clemson has won at least 20 games three straight years.

 Clemson has won two in a row over Boston College, both games last season. The Tigers won at Clemson and in the ACC Tournament over the Eagles last year.

 While Clemson has never lost to Boston College at home, the Tigers have never beaten the Eagles in Boston. Boston College has a 3-0 record in the series in games played at the Conte Forum, all within the last five seasons.

 K.C. Rivers had two three-point goals against Florida State and now has 257 for his career. He needs just three at Boston College to become Clemson’s career leader in that category. Terrell McIntyre had 259 between 1995-99.

 Rivers had seven steals vs. Duke to tie a Clemson single game record. He added a pair of thefts against Florida State and now has 194 for his career, tied with Terrell McIntyre for third in school history. Rivers ranks seventh in the ACC in steals per game.

 Booker has 194 career blocked shots, more than any other active ACC player. He currently leads the ACC in blocked shots per game and field goal percentage, and ranks second in rebounding.

 Clemson has seven wins over RPI top 50 teams this year, among the top 10 totals in the nation. Clemson has the ninth-best RPI in the nation and has played the 19th most difficult schedule.

 Trevor Booker has made 20 of his last 33 field goal attempts.

 Raymond Sykes has made 15 of his last 22 shots from the field.