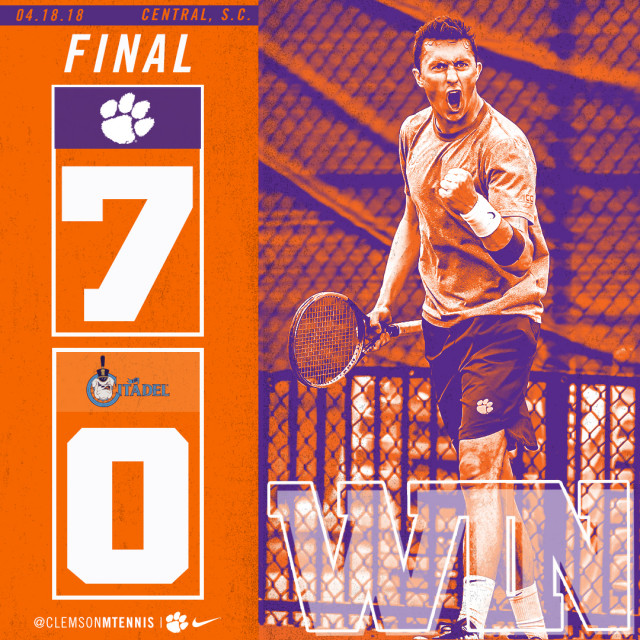 CENTRAL, S.C. – The Clemson men’s tennis team defeated The Citadel, 7-0 on Wednesday at the Rev. Leroy C. Cox Tennis Complex at Southern Wesleyan University in Central, S.C. With the win, the Tigers improved to 10-10 overall, while the Bulldogs slip to 10-24.

The Tigers claimed the doubles point, earning victories on all three courts. Sam Edwards and Yizhou Liu were the first to finish at No. 2 with a 6-0 win over Matthew Henson and Will Graham, improving to 10-7 on the season. The 47th-ranked duo of Alex Favrot and Simon Baudry clinched the doubles point with a 6-1 win at No. 1.

The Tigers carried the momentum into singles with Baudry and Favrot nearly clinching at the same time. Baudry was the first to clinch with a 6-0, 6-2 straight set victory at No. 2. 66th-ranked Favrot was not far behind when he clinched the point at No. 1 with a 6-2, 6-2 win over Matthew Henson, giving Clemson a 3-0 lead.

Liu jumped out to an early one set lead, taking the first set at No. 3, 3-0. The freshman clinched the match with a set two victory 6-1.

INSIDE THE BOX SCORE

– Liu picked up his third consecutive win, while improving to 4-0 at No. 3.

– The 7-0 sweep is the second of the season for Clemson, the first coming against Army on Jan. 26.

The Tigers return to action on Friday, April 20 as they host in-state rival South Carolina. The match against the No. 28 Gamecocks is set to start at 5 p.m.