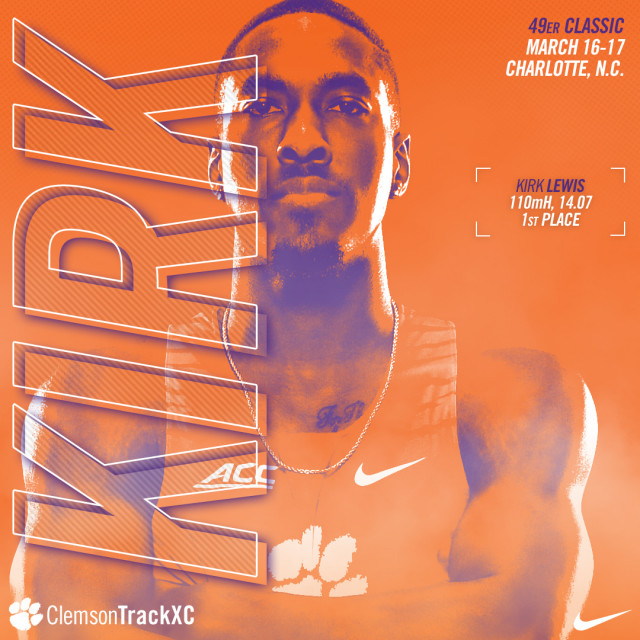 CHARLOTTE, N.C. – Clemson’s Kirk Lewis was just one-hundredth of a second shy of tying his personal record in route to winning the 110m hurdles Friday afternoon at Charlotte’s 49er Classic, which was held at Transamerica Field. The senior posted a time of 14.07 seconds to win the event. On the women’s side, the Tigers placed three in the top-4 in the 100m hurdles, including Ebony Williams who won the event for the Tigers. Williams recorded a time of 13.75 seconds, while Markeeta Thomas (14.04), and Sidney Marshall (14.17) finished in third and fourth overall, respectively.

Kendra Clarke took first in the women’s 400m in her first outdoor event in a Clemson uniform. The junior crossed the finish line in 51.07 seconds to beat the second-place finisher by more than three seconds.

Freshman Tiondre Toomer (47.95) made his outdoor debut a memorable one, notching a third-place finish in the 400m dash. Deonte Tolbert, also a freshman, placed in seventh behind Toomer with a time of 48.46 seconds.

“Today was our first outdoor meet and with that we are getting back into training,” said head coach Mark Elliott. “It was good to get a snapshot of where we are.”

The Tigers return for day two of the 49er Classic Saturday, beginning at noon with the women’s 4x400m relay. Live broadcast coverage of the 49er Classic can be accessed with a paid FloTrack.org subscription. For live results, visit clemsontigers.com