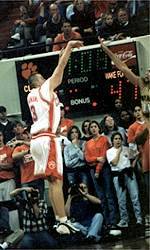 Clemson Most Valuable Player Senior Andrius Jurkunas finished the Florida State game with 17 points on 6-of-9 shooting from the field and 5-of-7 shooting on 3s…the native of Kaunas, Lithuania also had six assists with no turnovers…he had three steals and one block…his best effort may have come on the defensive end of the floor where he helped keep Florida State’s leading scorer, Ron Hale, in check…Hale entered the game averaging 17.2 ppg, but only scored six in 32 minutes of play on Saturday.

Will Solomon Scores 33 Points Sophomore guard Will Solomon continues to impress as he scored 33 points in the win over the Seminoles…Solomon was 13-of-22 from the floor and 6-of-12 on 3s…Solomon dished out four assists and collected a steal in the game…it marked the third time this season that Solomon has scored 30 or more points in a game.

Solomon On Fire In Second Half Will Solomon scored 22 of his 33 points in the second half of Saturday’s game…Solomon was 9-of-12 from the field in the second stanza and connected on his last six shots of the contest.

Clemson Has Hot Shooting Hands Clemson shot 56.4 percent from the field, 60 percent on 3s and 83.3 percent at the line in the win over Florida State…the Tigers hit a season high 12 3-pointers.

Tigers Record 24-to-7 Assist-to-Turnover Ratio Clemson had 24 assists and seven turnovers in the game…the 24 assists are the most by a Larry Shyatt coached Clemson team.

Key Stat of the Game Florida State leading scorer Ron Hale finished the game with six points and had a tough day from the field as he was 1-of-12…Hale was 0-for-9 on 3s…Clemson’s Andrius Jurkunas and Dustin Braddick get most of the credit for shutting down FSU’s leading scorer.

Chucky Gilmore Has Solid Birthday Performance Chucky Gilmore turned 20 on Saturday and was able to celebrate his birthday with a win over FSU…Gilmore finished the contest with six points and three rebounds…he had one assist, one block, one steal and no turnovers.

Former Tigers In Attendance Former Tigers Greg Buckner and Harold Jamison were in attendance on Saturday…both players were able to take advantage of the NBA’s All-Star break to come to Littlejohn…Buckner (1994-98) is now a member of the Dallas Mavericks, while Jamison (1995-99) is a member of the Miami Heat…the two might best be remembered for their role in Clemson’s win over North Carolina in the first round of the 1996 ACC Tournament…Buckner dunked over North Carolina’s Antawn Jamison with 0.6 seconds remaining to give Clemson a 75-73 win…Jamison had the assist on the play.

More Notes *Will Solomon scored 33 points this afternoon, giving him three straight games of 25 or more. He now has 88 points, shot 32-56 from the field and 16-27 from three-point land over the last three games. He scored 15 consecutive points for the Tigers and made six straight field goals late in the second half. This is the longest streak of consecutive points by one Tiger on record. The previous best was 12 by Elden Campbell against Oregon State in the season opener of 1987-88. He scored the first 12 points of the game.

*Solomon now has 13 games of at least 20 points, 10 or which have been 25 or more. Solomon’s mother Beverly was in attendance at today’s game.

*Andrius Jurkunas moved into fourth place on Clemson’s career three-point goal list. His five today give him 134 for his career. He moved ahead of Bruce Martin today. The former Clemson guard was on the Tiger bench as a member of Larry Shyatt staff. Jurkunas also had a career best 6/0 assist to turnover ratio and defended Ron Hale. Hale, the ACC’s fourth best scorer, was held to 1-12 shooting.

*Jurkunas is now 17-29 from the field overall, 11-19 on three-point shots in Clemson’s three home ACC wins this year. He has scored 48 points in those three games (NC State, Georgia Tech and Florida State).

*Clemson had a 24/7 assist/turnover ratio today. That 3.43/1 ratio is the third best in Clemson history for an ACC game, the 10th best overall. It was the best in an ACC game since March 3, 1993 when Clemson had 25 assists and just five turnovers in a victory over NC State.

*Clemson shot 56.4 percent from the field today, the best by the Tigers since shooting .571 in the season opener against East Tennessee State. The Tigers also shot a season best 60 percent on three-point shots and made a season high 12 three-pointers.

*Clemson’s 12 three-point goals were the most by the Tigers since 1-12-99 when Clemson made 12 against Florida State in Tallahassee. The 12 made three-pointers tied for the fifth most in a single game in Clemson history.