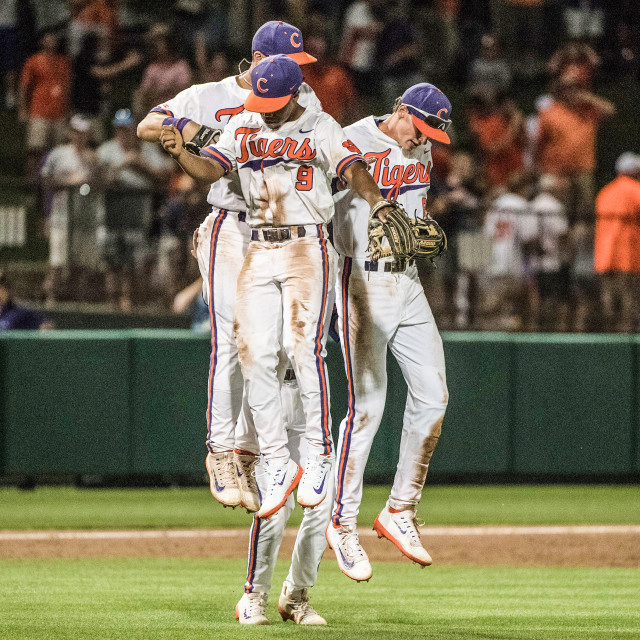 The 2018 Tigers return a potent lineup, but a key to the team’s success will be its ability to replace its entire rotation from a season ago. Behind pitchers Charlie Barnes, Alex Eubanks, Pat Krall and Tyler Jackson, Clemson hosted a regional for the second time in the second year of head coach Monte Lee’s tenure in 2017. But those four hurlers, who combined to start 61 of the 63 games a year ago, have departed.

“We lost some of the most consistent and reliable pitchers from the 2017 team, including six who have moved on to the professional ranks,” said Lee, whose 86 wins the last two years are tied for 12th most in the nation. “But I believe we have some outstanding young arms who are ready to step up and fill those roles in 2018.”

The 2017 pitching staff had a 3.93 strikeout-to-walk ratio, easily the best mark in the nation thanks to the weekend rotation of Barnes, Eubanks and Krall as well as the midweek starts made by Jackson. Paul Campbell also started two games, and he was drafted and signed as well.

“I’m extremely excited about our lineup coming back,” added Lee, whose Tigers were ranked No. 12 in the preseason by Baseball America. “We have an experienced infield with players who have been through the battles. However, we must replace Chase Pinder and Reed Rohlman in the outfield, players who were key to our success the past few years.”

The Tigers totaled 73 home runs in 2017, and the top three in terms of long balls are back in 2018. Players who combined for 46 of the 73 homers return, and with several newcomers who exhibited power potential in the fall, Clemson is poised to reach at least 73 home runs for the third year in a row.

One of the key losses was Rohlman, who was a second-team All-American and batted .361 with six homers, 34 RBIs and a .448 on-base percentage in 2017. Rohlman was one of nine Tigers from the 2017 team who was drafted in June.

Although many key players have moved on to the professional level, the future is bright for the 2018 squad, as 11th-year assistant coach Bradley LeCroyand third-year pitching coach Andrew See helped bring in the No. 9 recruiting class in the nation according to Perfect Game. The Tigers also have one of the most experienced volunteer assistants in the nation in Greg Starbuck, who is in his third year at Clemson after 17 years as an assistant coach at Elon.

The 2018 schedule features 33 home games, three games at Fluor Field in Greenville, S.C., and a game against Georgia at North Augusta, S.C., the inaugural baseball event at SRP Park. The season begins Feb. 16 with a three-game home series against William & Mary. Twelve teams participate in the ACC Tournament at Durham (N.C.) Bulls Athletic Park from May 22-27.

Senior Chris Williams (Garden Grove, Calif.) was taken in the 31st round of the 2017 draft, but he chose to return to Clemson as an experienced leader behind the plate. The preseason second-team All-American by Collegiate Baseball is a career .253 hitter with 22 homers and 89 RBIs in 106 games as a Tiger. He also won the team’s 2017 Dedication Award for outstanding work in the strength training room.

Two freshmen will add depth that Clemson has not had behind the plate in recent years. Matt Cooper(Virginia Beach, Va.) is a versatile catcher who can also play in the outfield and at first base. He was rated as the No. 247 freshman in the nation by Perfect Game.

Drew Donathan (Charlotte, N.C.) was a two-time all-state selection at Charlotte Christian School and was rated as the No. 115 freshman in the ACC by Perfect Game.

The Tigers return several veterans in the infield. The leader of that group is a player who has not seen significant playing time there, junior Seth Beer(Suwanee, Ga.).

A two-time All-American who won the Dick Howser Trophy in 2016, Beer is a career .333 hitter with 30 doubles, 34 homers, 123 RBIs, 108 runs and a .506 on-base percentage, playing exclusively in the outfield and as a designated hitter. Beer worked all fall at first base and is poised to take over the position vacated by All-ACC selection Andrew Cox, but still has the ability and arm to play in the outfield.

Sophomore Logan Davidson (Charlotte, N.C.) is back at shortstop after starting all 63 games there as a freshman in 2017. He was a first-team freshman All-American thanks to hitting .286 with 56 runs, nine doubles, 12 homers, 41 RBIs, a .388 on-base percentage and 10 steals. The switch-hitter tied for first among Power Five Conference freshmen in long balls.

Another returning starter in the infield is junior Grayson Byrd (Milton, Ga.), who made 42 starts at third base and 12 at second base in 2017. He hit .284 with a homer and 20 RBIs in his first active season as a Tiger and flashed a steady glove. He is a leading candidate to start at second or third base in 2018.

Junior Jordan Greene (Fort Mill, S.C.) is another veteran infielder who will vie for a starting spot at second or third base. He is a .254 hitter with a .362 on-base percentage in 97 games as a Tiger, including 50 starts at second base in 2017.

Senior Patrick Cromwell (Costa Mesa, Calif.) saw limited action in his first season at Clemson in 2017, but his outstanding fall has him poised to compete for the starting spot at third base. Cromwell’s go-ahead homer in the ninth inning lifted the Tigers to a win over No. 4 South Carolina in Greenville, S.C., last year.

Senior Adam Renwick (Spartanburg, S.C.) is in his fourth year in the program and has served primarily as a late-inning replacement and pinch-runner. The two-time ACC Academic Honor Roll member has played 67 career games (26 starts) and will also compete for playing time in the outfield.

Sophomore Grant Cox (Simpsonville, S.C.), who has shown flashes in the middle of the infield, has had an injury-plagued career in his first two seasons at Clemson after starring at Greenville High School.

Three newcomers will compete for playing time in the infield, including junior-college transfer Justin Hawkins (Prosperity, S.C.). He was an All-American at USC Sumter after lettering at Mid-Carolina High School and is one of the Tigers’ best power hitters.

Two seniors are among the candidates for playing time in the outfield. Drew Wharton (Suwanee, Ga.) and Robert Jolly (Myrtle Beach, S.C.) have been role players during most of their careers, but both have a chance to make a splash in the outfield in 2018. Wharton has made 22 career starts and has not committed an error in 76 chances along with having one of the strongest outfield arms on the team.

Jolly has spent most of his career as a catcher and designated hitter. He is a career .273 hitter with a .370 on-base percentage in 116 games (58 start). In 2017, he hit .314 in ACC regular-season games and has showed a penchant for clutch hitting during his career.

Junior Sheldon Reed (Bradley, S.C.) joins three first-year freshmen as candidates to start in the outfield. Reed, who can also play at first base, was a first-team all-region selection at Spartanburg Methodist College in 2017.

Kier Meredith (Winston-Salem, N.C.), the No. 42 freshman in the nation by Perfect Game, suffered an injury during the fall that may keep him out of action during the early part of 2018, but he does possess the speed and defensive ability to compete for the starting spot in center field.

Freshman Bryce Teodosio (Simpsonville, S.C.) exhibited raw power during his limited fall action due to injury after a standout career at Mauldin High School. He was rated as the No. 113 freshman in the ACC by Perfect Game.

Bo Majkowski (Johns Creek, Ga.), the No. 201 freshman in the nation by Perfect Game, is the son of Don Majkowski, a 10-year NFL quarterback with the Packers, Colts and Lions.

A total of 19 pitchers, including 10 who have pitched in a game for the Tigers, are on the 2018 roster. Returning pitchers have combined for only 18 career starts, including just three in ACC regular-season games. But the coaching staff believes many up-and-coming Tigers have what it takes to win at the highest level.

The most-seasoned Tiger hurler is junior righty Ryley Gilliam (Kennesaw, Ga.). He served as the closer in 2017 and was 3-1 with four saves and a 2.57 ERA in 27 relief appearances. He also totaled 50 strikeouts and played for the USA Collegiate National Team alongside Beer during the summer. Gilliam has starting experience as a Tiger as well.

Brooks Crawford (Bishop, Ga.) is another junior righthander with bullpen experience. In 68.2 innings pitched over 43 career appearances, he is 7-0 with a save and 2.88 ERA. He has the versatility to pitch in relief or vie for a starting role.

Senior righty Ryan Miller (Venice, Fla.), a candidate for the weekend rotation, was selected in the 31st round of the 2017 draft, but elected to return for his senior season. The hard thrower had a 1-0 record and 3.09 ERA in 11 relief appearances before his season was cut short due to injury during midseason.

Sophomore righthander Owen Griffith (Aiken, S.C.) saw limited action as a freshman in 2017, but he came on strong late in the season and had a 1.23 ERA in 12 relief appearances. He pitched 4.1 scoreless innings of one-hit ball to earn his first career win against UNC Greensboro in the Clemson Regional on June 4.

Four lefthanders with game action return from a season ago, all of whom will compete for important roles. Senior Alex Schnell (Milton, Ga.) has pitched 62.2 innings over 45 appearances in his career. He had his best season in 2017, as he was 1-0 with a 2.51 ERA in 13 relief outings.

Sophomore lefties Jacob Hennessy (Moore, S.C.), Mitchell Miller (Covington, Ga.) and Jake Higginbotham(Hoschton, Ga.) give the Tigers a bevy of options. Hennessy had a 3.82 ERA in 26 relief appearances as a freshman in 2017. He also allowed just 11 walks with 37 strikeouts.

Miller made just six relief outings in 2017, but he starred with Falmouth in the Cape Cod League in the summer. He was 1-1 with two saves, a 2.57 ERA, .173 opponents’ batting average and 29 strikeouts against seven walks in 21.0 innings pitched, as he was a Cape Cod League All-Star Game selection.

Second-year righties Travis Marr (Castle Rock, Colo.) and Carson Spiers (Greenville, S.C.) will compete for innings out of the bullpen in 2018. Marr saw action in only one game last season before suffering a season-ending injury, allowing him to earn a medical redshirt.

Spiers, a sophomore, was a two-way player as a freshman in 2017, but he will focus exclusively on pitching in 2018. He allowed one earned run and no walks with three strikeouts in 3.0 innings pitched over three relief appearances.

Among the nine pitchers who have not yet seen action, four are redshirt freshmen, lefties Mat Clark(Hilton Head Island, S.C.) and Ryne Huggins(Newberry, S.C.) along with righthanders Andrew Coker (Hartsville, S.C.) and Bo Gobin (Summerville, S.C.).

Clark had an outstanding fall season and will be in the mix for a starting spot on the mound. Huggins, the son of Mike Huggins, a three-time letterman (1986,87,89) at Clemson, was a standout at Newberry High School who redshirted in 2017.

Coker was a top-20 player in South Carolina by Diamond Prospects, while Gobin was the state AAAA player-of-the-year at Summerville High School.

Two first-year freshman lefthanders, Bryce Bowen(Bowman, Ga.) and Sam Weatherly (Howell, Mich.), also have the ability to contribute in the field. Bowen was rated as the No. 304 freshman in the nation by Perfect Game and will also compete for playing time at first base.

Weatherly is a candidate for a starting spot in the outfield and playing time at first base along with his prowess on the mound. He was rated as the No. 57 freshman in the nation by Perfect Game and was drafted in the 27th round.

Holt Jones (Santa Monica, Calif.), Connor O’Rear (Aiken, S.C.) and Spencer Strider (Knoxville, Tenn.) are three freshman righties who round out the roster. Jones is one of the tallest Tigers in history, standing 6’7”. O’Rear was rated as the No. 93 freshman in the ACC by Perfect Game.

The hard-throwing Strider is a candidate to make an immediate impact in 2018. Strider, rated as the No. 28 freshman in the nation by Perfect Game, was drafted in the 35th round after a stellar career at Christian Academy of Knoxville.