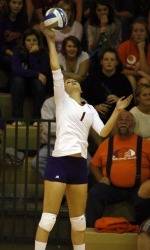 CLEMSON, SC – The Clemson volleyball team downed the Georgia Tech Yellow Jackets, 3-0 (25-17, 25-18, 25-20) on Friday night to open the ACC season in Jervey Gymnasium in front of a raucous crowd of 1,904 fans. With the win, the Tigers (9-3, 1-0 ACC) claimed the Clemson Classic Title, the third tournament championship of the season for Coach Jolene Jordan Hoover’s club.

Clemson won a fifth consecutive match, with the most recent coming on Wednesday, a 3-0 decision over Furman in the Clemson Classic opener. Serenat Yaz claimed the tournament’s MVP, while Alexa Rand and Sandra Adeleye were named to the All-Tournament team.

It was the first time in seven matches between Georgia Tech (7-4, 0-1 ACC) and Clemson that didn’t go to five sets. Clemson was coming off a 3-0 win over Furman on Wednesday, and continued the momentum Friday, hitting the Jackets with constant energy and a consistent attack.

Yaz led all players with 11 kills in 22 attacks with no errors, while Rand had nine kills and four blocks. Adeleye had just six kills on Friday, but chipped in on seven total blocks to help the Tigers keep Yellow Jacket All-America candidate Monique Mead at bay. The junior had entered leading the nation in kills per set and more than 5.5, but Clemson held her to just 11 kills in 37 swings, and a .054 hitting percentage.

Clemson’s outsides had 17 kills with no errors, and combined for ten digs and five blocks. Kamryn Sherman led Clemson with 18 assists, while Hannah Brenner had 14. Libero Natalie Patzinhad nine digs and five assists for the Tigers as well.

Clemson took the first set after racing out to a 7-3 lead behind a pair of blocks. The teams then traded points, leading to an 11-9 Tiger lead. But Clemson exploded for a 13-3 lead to put the set out of reach and take a 24-12 lead, and they ended up taking the set, 25-17 as Mead’s attack hit the net. Serenat Yaz led Clemson with four kills, while Sandra Adeleyegot in on four blocks.

The second set was very similar to the first, in that neither team pulled away early, but Clemson used a 5-1 run to take a 16-11 lead. The Tigers continued to spread the ball around, finally finding Rand for the kill that clinched the set, 25-17. Yaz added another four kills, while the Tigers again accumulated four blocks.

The third set was again close in the beginning before Clemson got some separation, this time turning a 12-10 lead into a 17-11 advantage with a 5-1 run. Tech closed to four at 22-18, but a Tiger timeout righted the ship as Brenner found Kristin Faustfor her sixth kill, and a Georgia Tech middle hit her attack into the net to clinch the match for the Tigers. Clemson was able to side out on 16 of 20 attempts, a strong defensive statement.

Clemson returns to action next week as they travel to Wake Forest on Friday and Duke on Saturday.