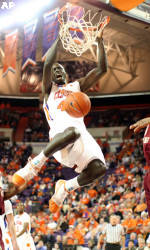 CLEMSON, S.C. (AP) — David Potter and Andre Young each had career highs of 19 points as Clemson ended a four-game losing streak to Florida State with a 77-67 victory Wednesday night.

The Tigers (17-7, 5-5 Atlantic Coast Conference) had come in having lost four of five this season, the one-time ACC contenders in danger of falling even further out of the muddled league chase.

Instead, Potter and Young’s outside shooting proved the difference against the taller, stronger front line of Florida State (17-7, 5-5).

The two combined for seven of Clemson’s eight 3-pointers. Young had two from long range and Potter hit one as the Tigers closed the opening half with an 18-8 run to lead 37-24.

The Seminoles, who rallied from 19 down to win here at Littlejohn Coliseum last season, could not come back in this one.