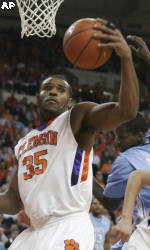 CLEMSON, S.C. (AP) — Clemson’s Demontez Stitt had a dream so clear and vivid the night before facing No. 12 North Carolina, he had to call someone as soon as he could.

“I woke up this morning, called my mom, texted a couple of people,” Stitt said. “I told them that I had a dream where I had a good game against the Tar Heels, we won by a lot and everybody stormed the court.”

“You know what happened tonight,” Stitt said with a smile.

The Tar Heels ended with 26 turnovers, matching the most committed in coach Roy Williams’ seven seasons.

The Tigers hadn’t beaten the Tar Heels in nearly six years, but used a first-half blitz to lead by 23 points and held on against one of their toughest ACC opponents.

Stitt hit Clemson’s first two baskets during and Booker had a three-point play to close a 17-6 opening run less than five minutes in.

North Carolina never got any closer, losing for the fifth time in six games away from the Smith Center.

Clemson fans rushed the court as the buzzer sounded. And why not? It was only the fifth time in 16 years they’d seen the Tigers topple the Tar Heels. They’ll get to celebrate for a while, too, because Clemson won’t travel to Chapel Hill–where it’s 0-54.

“I don’t look at things that way,” Tigers coach Oliver Purnell said. “It is a satisfying ACC win, but it’s so early.

North Carolina came in thinking it solved some of its early season problems.

Injured starters Marcus Ginyard and Will Graves were back in the lineup after opening the ACC with a solid win over Virginia Tech last Sunday night. Heck, Williams had ditched the sling that protected his injured left arm.

But North Carolina played a ragged opening half with 15 turnovers, four of those coming in Clemson’s opening spurt and could not dig itself out of the hole.

At one point early in the second half, a frustrated Williams swapped out his starting lineup for five freshmen.

None of it worked.

“I’ve got to do everything better,” said Williams, who won national championships in 2005 and 2009 at his alma matter.

Williams pointed to a lack of urgency on the defensive end and a lack of poise offensively.

Clemson fans were ready for this one for some time. The game had been a sellout before the season started and students set up a tent city in frigid conditions outside Littlejohn this week to guarantee a seat.

But that’s the way it’s been at Clemson the past two times the Tar Heels have come to town for the showdown of ranked teams and North Carolina left with victory both times.

This time, the Tigers did not disappoint.

Clemson hit seven of its first nine shots to move in front 17-6 against the shocked Tar Heels.

Clemson kept pouring on the pressure. Andre Young’s 3-pointer made it 30-12 and Tanner Smith connected on another to increase the lead to 23.

North Carolina’s inside strength didn’t show against Clemson. Thompson had just one basket and Davis was 0 for 3 as the Tigers led 50-32 at the break.

The Tar Heels got within 68-57 on Larry Drew II’s basket. Stitt, though, finished off a three-point play the next time down to regain control.

The scene at Littlejohn looked a lot like last year when Clemson defeated Duke 74-47, the Blue Devils biggest margin of defeat in almost 20 years. What thought to be a breakthrough victory, though, was one of the season’s final highlights as the Tigers lost seven of their last 11 games.

“We’ll enjoy this for the night, but tomorrow it’s time to go back to work,” Stitt said.