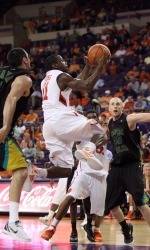 Tigers Fall on Buzzer-Beater at Home to Coastal Carolina, 60-59

CLEMSON, SC – Coastal Carolina’s Chris Gradnigo scored on a putback off his own miss at the buzzer to lift the Chanticleers to a 60-59 victory over Clemson on Tuesday in front of 6,211 fans at Littlejohn Coliseum. Andre Young led the Tigers with 20 points. Clemson drops to 2-2 on the season, while Coastal Carolina improves to 5-0.

“It was a very disappointing loss,” Clemson Head Coach Brad Brownell said. “We had chances to make big stops late in the game and did not get a stop when we needed one.”

Following an Andre Young miss with 29 seconds to play, Coastal Carolina set up for one last shot. Gradnigo got a good look at the basket but missed on a jumper. However, no one blocked out guard Anthony Raffa as he secured the offensive rebound and called a timeout with nine seconds to play.

The Chanticleers then set up for the last shot. Gradnigo got a one-on-one matchup with Clemson’s Bryan Narcisse, where he drove to the foul line and lifted a floater with three seconds left that bounced off the back of the rim and right back to him, and he tipped it in as time expired.

“I drew it up, but I didn’t set up the second shot,” Coastal Carolina Head Coach Cliff Ellis said. “We were just fortunate. We wanted the ball in Chris’ hands and fortunately, he was able to make that extra play.”

The Tigers took a 59-55 lead with 1:31 to play on a Tanner Smith three-pointer from the right side, but Clemson could not get a stop down the stretch as Coastal scored on four of its last five possessions.

“It comes down to finishing plays and making stops and we are not doing that right now,” Smith said. “We need to find ourselves, that’s for sure.”

Clemson thought it had after building a 33-21 lead late in the first half thanks to a 12-0 run. Andre Young, who led the Tigers in scoring, produced 10 of the 12 points, including a pair of three-pointers. Clemson led 33-25 at the break.

The Tigers defense held Coastal Carolina to 33.3 percent shooting in the first half. The Chanticleers came into Tuesday’s game averaging 89.5 points, while shooting 54.3 percent from the floor. It was a much better performance defensively than the one they showed in last Saturday’s loss to the College of Charleston.

“In the first half we played well defensively,” Brownell said. “The field goal percentage was a little misleading in the second half because of the fastbreak layups. We can’t guard those, but in the end we did not defend like we needed to. It was not any better defensively because we did not get stops late.”

Clemson will host Furman at 7:00 PM on Friday.

Note: Clemson presented Ellis, who coached at Clemson for 10 years 1984-94 with a plaque before the game in appreciation for what he did for Clemson basketball. Ellis won 177 games at Clemson during his time and led the Tigers to eight postseason appearances and an ACC Regular Season Championship in 1990.

“I’m very appreciative of Clemson,” he said. “It’s near and dear to my heart. I have two daughters and grandchildren and a son-in-law that live here. I have a lot of friends here.”

Ellis, who kissed the Tiger Paw at center court prior to his last game as Clemson’s head coach in 1994, did the same after receiving his plaque before tipoff.