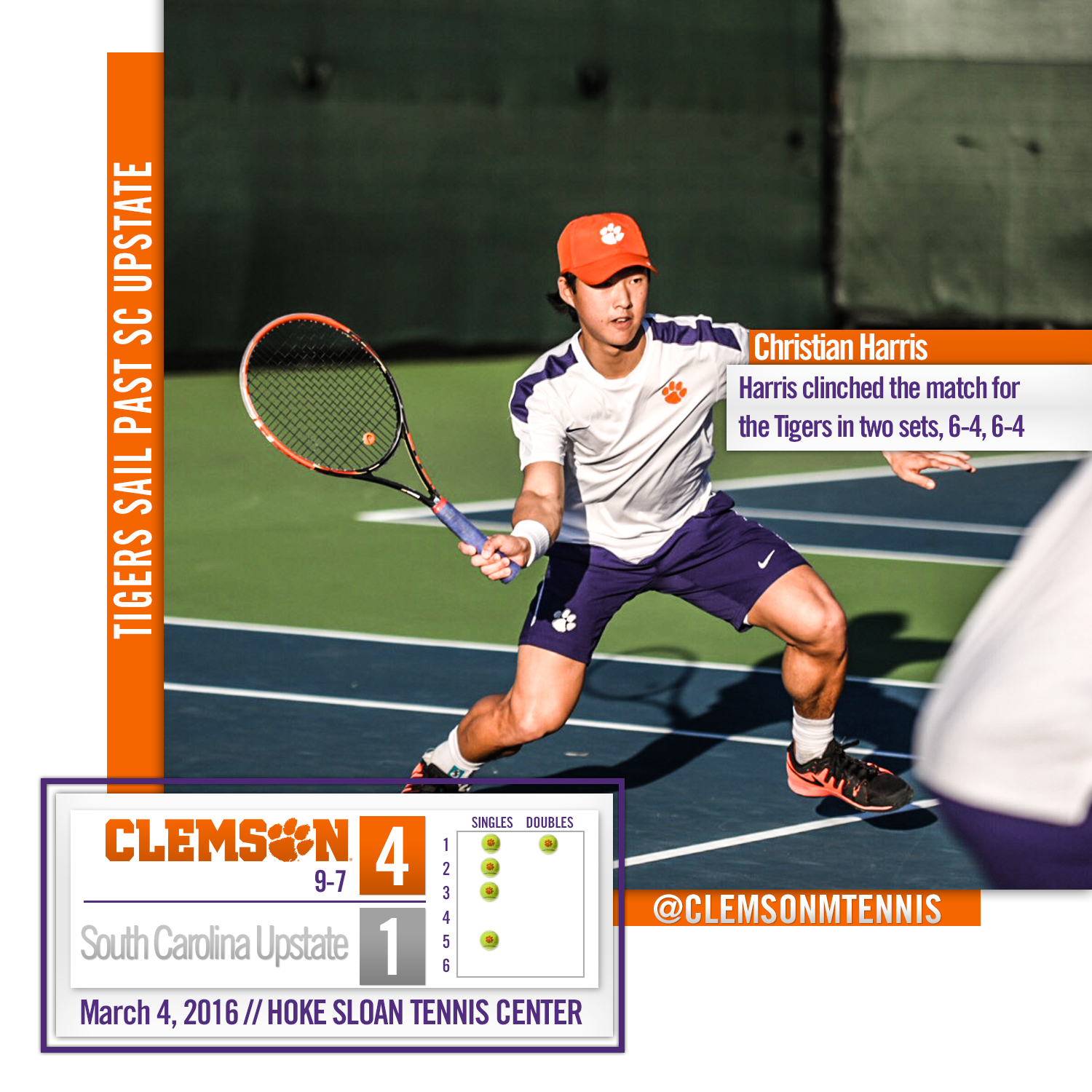 CLEMSON, S.C. – The Clemson men’s tennis team fell to Florida State 7-0 on Friday morning at the Hoke Sloan Tennis Center. The match against the Seminoles was hard fought, with five out of the six singles matches advancing to three sets. The Tigers rebounded for a 4-1 victory over USC Upstate in the second match of the day, to bring their record to 9-7 overall (0-1 ACC).

Recap vs. Florida StateFlorida State quickly clinched the doubles point over the Tigers. The Seminoles cruised on courts two and three, winning 6-0. The loss for Robert Dudley and Daffra Sanon at No. 2 drops was only their second of the season, dropping them to 5-2 overall as a doubles team. Alex Favrot and Luke Johnson were leading on court one, 3-2, when the doubles point was clinched.

In singles play, five out of six matches advanced to three sets, on Courts 1, 3, 4 and 5. Florida State gained three points on courts two, four and five, in that order, to clinch the match. Alex Favrot battled for three sets at No. 1 against the 18th-ranked player in the nation, senior Benjamin Lock, falling 7-5, 2-6, 3-6. Christian Harris dropped his first set, 7-5, and battled back for a second set win, 6-4, before falling in a hard fought third set, resulting in the singles sweep for the Seminoles.

“I am incredibly proud of the way the team competed, cheered, got behind each other and did all the right things today,” said Head Coach Chuck McCuen. “Even though the score reflects something different, in my opinion, we won the day. We did not stop fighting against Florida State, and we sent a message to the ACC that we are talented and that we are not going to go away.”

“Hats off to Alex Favrot who continues to lead at number one, he is always one of the last matches on court. Daffra Sanon and Luke Johnson are doing all the right things. The guys came out and did all of the extras this week, in order to put themselves in position to go to three sets in five out of the six singles matches. I’m usually not a man of excuses, but Luke came up a little bit lame in the tiebreaker; I am convinced that would have been a three-set match as well. Credit to our guys for not going away after a tough doubles loss, and for competing the way I know they can.”

Recap vs. USC UpstateIn the second match of the day, the Tigers dropped the doubles point against South Carolina Upstate. Favrot and Sanon teamed up at No.1, winning comfortably, 6-1. Arturo Pinazo and Austin Ansari fell at No. 2 before the Spartans clinched the doubles point by winning at No.3, 6-4.

Clemson quickly gained two points from Favrot and Sanon at No. 1 and No. 2 singles, respectively, both winning in two sets. Ansari was not far behind, winning in a strong showing at No. 3, 6-4, 6-2, giving the Tigers a 3-1 lead over the Spartans. Harris clinched the match at 4-1 for the Tigers at No. 5 singles, winning in straight sets, 6-4, 6-4. Brent Lett was well on his way to win in two sets at No. 6, leading 5-0 in the second set when the match was clinched.

“We competed much better all day,” said Associate Head Coach John Boetsch. “Against FSU, we had the momentum and were in position to close the match, we just have to get better at that. We did it at the end against USC Upstate. This is a ‘Team’ on the ‘Rise.’ Everyone is working hard and we are going to be tough down the stretch.”

Clemson returns to the courts on Friday, March 11, when the Tigers host Notre Dame at 11 a.m. at the Hoke Sloan Tennis Center. The Tigers then travel to Louisville on March 13.