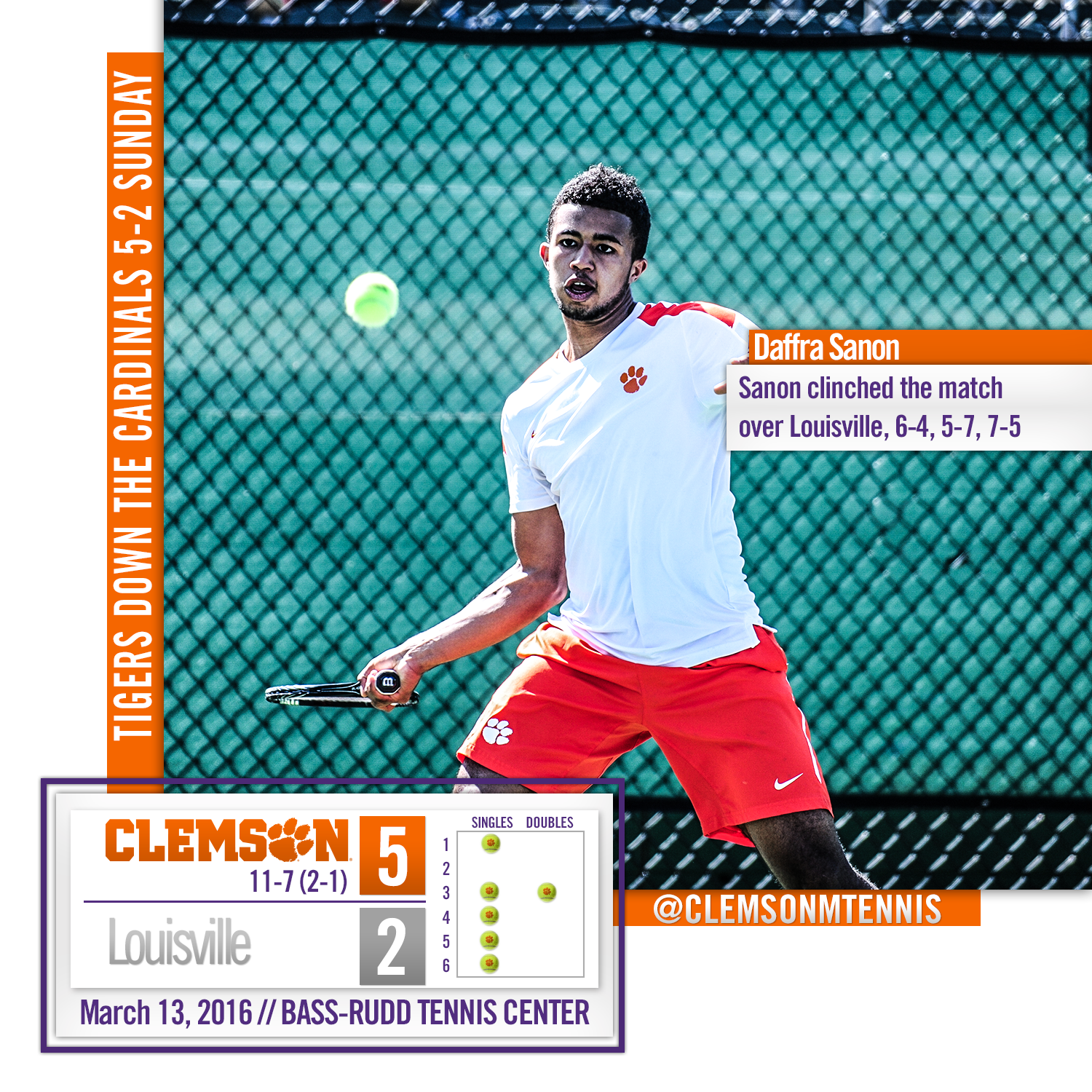 Tigers Down Cardinals 5-2 Sunday in Louisville

LOUISVILLE, Ky. – The Clemson men’s tennis team defeated the Louisville Cardinals on Sunday morning at the Bass-Rudd Tennis Center by a score of 5-2. The match against the Cardinals was hard-earned for the Tigers, with the clinching point coming from junior Daffra Sanon, who won at No. 3 singles in three sets. The Tigers improve to 11-7 overall and 2-1 in the ACC with the win, while the Cardinals fall to 8-9 (0-4 ACC).

“I thought our entire team was confident from this past week of practice and the Notre Dame match. We were all in a good mindset for today. After the doubles point, I just wanted to help get the team some momentum back, so I’m glad I was able to do that,” said junior Christian Harris. “Everyone fought hard for each other today. We are all enjoying the process and eachother right now.  Playing alongside all of these guys is such an honor and I just want to give my best for them and I know that they all want the same for the team.”

“We are very pleased with the fight and heart of our guys today. Louisville is a tough place to play and we had to come from behind against a competitive and well-coached team,” said Associate Head Coach John Boetsch. “Christian played a huge role in getting momentum back, and Daffra and Austin showed a lot of grit coming back in their third sets. Winning the match after losing the doubles point is huge for our confidence moving forward.”

Louisville earned the doubles point against the Tigers with wins on courts one and two. Robert Dudley and Daffra Sanon continued their winning ways at No. 3, winning 6-3. Austin Ansari and Arturo Pinazo fell on court two, 6-4. All eyes turned to court one where the doubles point came down to Luke Johnson and Alex Favrot, eventually falling in a tiebreak, 7-6(3).

Clemson returns to the courts on Friday, March 18 when the Tigers travel to Georgia Tech to take on the Yellow Jackets. The match is set for a 5 p.m. start. For live scoring updates, follow http://www.ramblinwreck.com/livestats/m-tennis/xlive.htm. Periodic updates will also be available via Twitter, @ClemsonMTennis